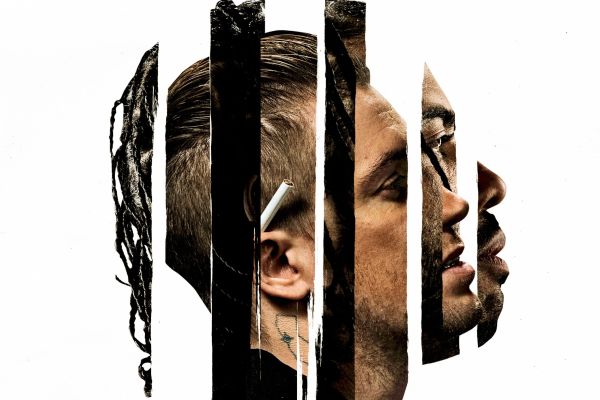 There are many movies that would like you to forget that there is injustice in America. “Blindspotting” is not one of these movies. Daveed Diggs, of “Hamilton” fame, and Rafael Cassal, an American poet, wrote the screenplay for the film. “Blindspotting” forces its audience to take a good, hard look at the harsh reality of the lives of people in lower income areas that are slowly being gentrified. However, “Blindspotting” accomplishes this in a creative way, often using the freestyle rapping talents of Diggs and Cassal (who also star as the film’s protagonists) to convey messages and ideas. This creative and stylized approach to presenting this reality makes for a captivating film about the way we look down upon people of different races, backgrounds, and lifestlyes.

“Blindspotting” follows Oakland native Colin Hoskins (Daveed Diggs), who is living out the last three days of his probation after spending two months in jail for a felony charge.  On his way home, racing to make his 11pm curfew, Hoskins witnesses a police officer gun down a black man in the street. Now haunted by these events, Colin begins to question his place in society as a black man himself, all while trying to maintain his relationship with his childhood best friend Miles (Rafael Cassal), who continues to act hot-headed and volatile in order to make up for the fact that he is one of the few white people in his neighborhood (even going so far as to wear a grill). As Colin finishes his probation he is forced to realize the sad truths of the world as he attempts to keep himself, Miles, and Mile’s girlfriend and child out of trouble.

In terms of flaws, the beginning of the film drags just a little too much. It spends the first half hour or so introducing the world and all it’s characters. This is not necessarily a bad thing, but it feels like the real meat of the story should’ve come in a little earlier. However, the performances of Diggs and Cassal are so enthralling that it makes this open slog still fairly enjoyable.

Once this movie gets going, it truly delivers. There are no big action sequences like many other big summer blockbusters. Rather, there are small, intimate scenes between characters that make the audience think about the society we live in (including one spectacular scene between Diggs and Cassal near the end of the film). The story, when it truly starts, keeps you enticed, ending with one of the most tension filled, original climaxes to come to the silver screen in recent years. If nothing else, see this movie just to watch the brilliance of the last 15 minutes or so.

Diggs and Cassal also provide wonderful performances throughout the entirety of the film. You are truly invested in both of these characters, despite both of their visible flaws. Diggs makes for great protagonist as we watch him simply try to adjust to normal life. Every time he finds himself in trouble, it is almost impossible not to worry about him as if he were your own friend.

Cassal also provides a great performance in his movie debut. His charismatic nature mixed with his propensity to lash out at those he dislikes make it impossible to take your eyes off of him. You understand his need to feel like the toughest guy on the street, despite the fact that you understand his worldview is mistaken. Together, these two have an amazing chemistry that is easy and fun to watch.

Finally, the integration of freestlye rap into the narrative structure of the story is brilliant and original. Only minutes into the film, we are introduced to the fact that the two protagonists love to freestyle to pass time. These scenes of the two of them rapping often convey bigger, poignant ideas that are rhythmically and lyrically a pleasure to listen to. Possibly the best uses of this tool are during a haunting nightmare sequence and one of the films last scenes. The use of freestlye rap as a storytelling device works in a way that has not been seen before (at least at the calibur that “Blindspotting” uses it).

To conclude, see “Blindspotting.” It is a film that is not getting anywhere close to the attention it rightfully deserves. It is a poignant, original film that deserves to be seen. In an age where movies are churned out to make a quick buck, “Blindspotting” defies this trope and feels like everyone involved truly cared about this film. The end product is a wonderful movie that will keep you invested until the very end.