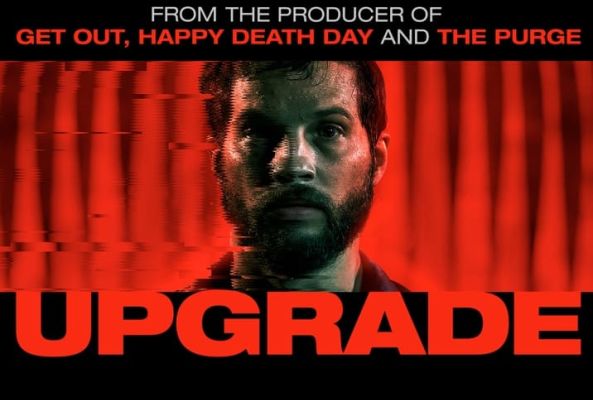 When most people hear “Blumhouse productions,” their minds instantly jump to the many (frequently sub-par) horror movies that are released sporadically throughout the year. Either that, or there’s no connection to anything at all. However, this time, it appears that Blumhouse may have stumbled upon something fairly impressive when venturing into another genre: science fiction.

“Upgrade” tells the story of a not too distant, computer controlled future, where computer enhancements to the human body are not uncommon. We follow technology resistant every-man Grey Trace as he is enhanced by a new experimental device called “STEM,” which allows Grey to walk again after a mugging leaves him paralyzed and his wife murdered. With the help of his new body controlling computer, Grey has the opportunity to take revenge upon those who killed his wife.

The first thing to note about this movie is that behind all the violence and well-oriented action sequences, there is a surprising emotional heart. The movie spends its first act developing our hero and his wife. Despite the fact that you go into the movie knowing the inevitable fate of these two characters, the time spent with them makes the tragedy of the inciting incident tug at your heartstrings anyway. For a movie from a studio not known for its impeccable writing and character development, “Upgrade” does a very good job establishing who its characters are and the world they live in.

On the topic of the writing, there isn’t much to fault here, and the audience is often surprised with some genuinely funny moments (albeit with a very dark humor, due to the graphic nature of the film). While the writing isn’t Oscar worthy, it does a very solid job of telling a concise, fascinating story, with interesting themes and ideas on the meaning of control and what it means to give up control of yourself entirely. In a movie that marketed itself as a fun, violent, science-fiction revenge romp, the last act really shocks you and forces you to think, specifically about technology and the power and control it has over us.

All added pluses aside, at heart, “Upgrade” is a violent, fun, vengeful, action movie. Every fight scene is choreographed wonderfully, and there is an impressive feat of acting as Logan Marshall Green (our protagonist, Grey Trace) gives incredulous, disbelieving facial expressions as the rest of his body works like a well oiled killing machine. In reference to the violence and killing found in “Upgrade”, those who are queasy or don’t like graphic violence should stray away from this movie. While watching the evil-doers get punished by our hero provides a sense of catharsis for the audience, this catharsis is often brought about by a gory display of violence.

In summary, “Upgrade” is lots of fun – and a little extra as well. Every fight scene is exciting and captivating, but the characters, world, and interesting ideas around these fights really makes the movie shine. While “Upgrade” is not the best movie you’ll see this year, if you like science-fiction or glorious revenge movies with a touch of good character development and writing, “Upgrade” is the movie for you. For those out there that tend to stray away from gratuitous violence movies, perhaps you should stray away from this movie as well. But if you can stomach or enjoy action and violence in movies, there is a fun movie here with an emotional and thematic heart you shouldn’t miss out on.