‘Escape Room’ isn’t good, but there’s no harm in seeing it 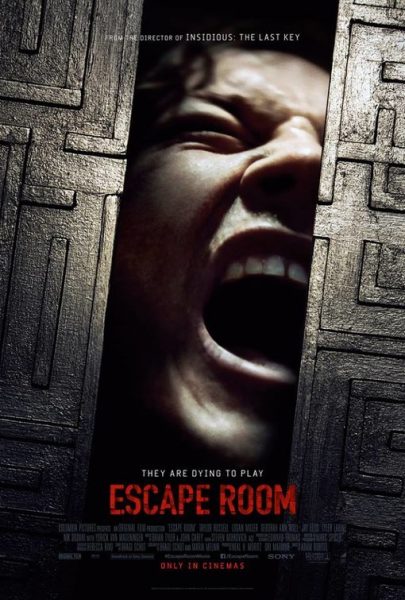 To cut to the chase, this movie is bad. But it’s also not. The pretentious movie snob in me wants to hate this movie for its awful script and paper thin characters, yet the other part of me cannot deny the genuine fun I had watching these puzzles. Curse these January releases and the conflict they me present me with. Let’s talk about “Escape Room.”

“Escape Room” follows an ensemble cast of characters, all in need of excitement in their life, as they are invited to new, immersive escape room, with the promise that the first one to escape would win $10,000. However, not long after the puzzles begin, our heroes begin to realize that these traps are not only dangerous, but life-threatening, and failure to solve the puzzles in each room will be fatal. As tensions rise, and people begin to turn on each other, survival becomes harder and harder with each room.

Let’s begin with these characters, which is a term that is being used here loosely. First there’s Ben (Logan Miller): a young deadbeat and alcoholic (albeit a very unconvincing one). Then there’s Zoe (Taylor Russell), who is a nerd, and pretty much nothing else. Every other line she says in her introductory scenes is pretty much just a math equation. Following that is Jason (Jay Ellis) a wealthy corporate salesman, who’s also very rude, and has no other personality traits. There’s also Amanda (Deborah Ann Woll), an anxiety ridden veteran, Mike (Tyler Labine), a nice trucker who keeps accidentally saying things that are sad, and finally Danny (Nick Dodani), who plays video games and has been to a few escape rooms before. To elaborate on how thin these characters are, in his first 3 minutes on screen, Danny plays a video game, tells someone that he plays lots of video games, and then acts genuinely shocked upon learning that another character doesn’t play video games. The characterization is so thin and bland that it’s almost funny. Actually, it is funny. I laughed a decent bit.

Going hand in hand with the characterization, the writing overall is just bad and cheesy. Everything feels stilted, like it’s a step or two removed from human speech, and for some reason, characters always talk to themselves. It’s pretty excessive in the grand scheme of things, and it’s repetition doesn’t normalize it by the end of the movie. Instead, it just emphasizes how strange it is. It’s honestly difficult to really talk about the writing more than that; it’s so forgettable that I can’t even remember specific gripes with it. It’s just not very good.

The movie also drags on for 20 minutes too long. They try to throw some twist that connects all the characters, but in the end it falls flat. After that reveal, there’s still one or two more trap rooms, and then a final confrontation, when it feels like it should be wrapping up. Even after said final confrontation, (which kind of ruins the parts of the movie that were good, by giving a face to the faceless villain that made the mystery more interesting, but that’s another story that I won’t go into in case anyone really cares about spoilers) the movie goes on with 4 or 5 more scenes. A whole 10-15 minutes way after the movie stopped being any sort of interesting.

However, as I mentioned, not everything is bad. The puzzles, admittedly, are fun. Each of the rooms has their own cool thing that makes each one distinct, and watching these enormous and complex contraptions slowly pick off the group one by one provides for solid thriller enjoyment. You won’t feel anything emotional when any of these characters die, but at least these sections have modicum of tension and fun. Due to the fact that pretty much the entire movie is these puzzle rooms, it kind of redeems the whole film. Pretty much nothing is good about the movie besides the actual escape rooms, but the escape rooms are the movie.

There’s honestly not much to say about this movie. Is it good? No. Is it fun? Well, yeah. This movie has so much wrong with it that I want to hate, but I just can’t. It’s pretty good time, however bad the delivery is. You’re not missing anything if you miss this one, but if you want mindless fun, check this one out. However, there are some December releases still playing that are also mindless fun and are all around better made. Go see “Aquaman” or “Bumblebee.” They’re not incredible but they’re more fun than “Escape Room,” and they’re better made.