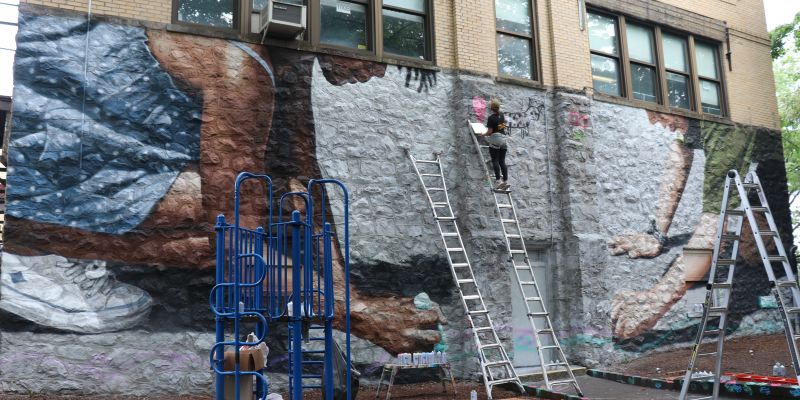 In this project, Hutch joined forces with an organization called Street Art for Mankind (SAM) June 17 to June 19 to paint the mural on the outer west wall of the school by the upper playground .

SAM is an organization that is responsible for the largest mural installation in New York, as well as mural projects in Larchmont and Mamaroneck—and now one on the west wall of Hutchinson School. It is a non-profit organization that unites prominent street artists from all around the world in a movement to free children from forced labor and slavery. All of the funds it raises goes to awareness campaigns and actions in the field to save children, especially the raid-and-rescue programs operated by the Nobel Peace Prize laureate Kailash Satyarthi and his KSCF Foundation.

Thibault Decker, a staff member of Street Art for Mankind, said, “With this project, we are covering three portions of this outdoor area because this will be the only available space open while the construction of the new school happens. We love working with kids. SAM has a large vision to get kids out of forced child labor. Our art and themes cause people to actually stop and think what it really means to be a global citizen.”

The theme of Hutch’s large-scale mural is global citizenship and how people are responsible for each other. The fifth grade created and designed a list of words that center around that theme, and they will be turned into stencils to make the “River of Words.”

“I’m spray painting students drawing with chalk on the sides and words based on global citizenship in the middle,” said lead artist B.K. Fox. “With spray paint, you can do anything.”

Every class signed up in the office to spend 20 minutes outside to do the art with the artist and parent volunteers. The completed work will have a word painted by every student in the school. Before the old school is torn down, the school district will save many pieces of the walls of Hutchinson to display in the new building.