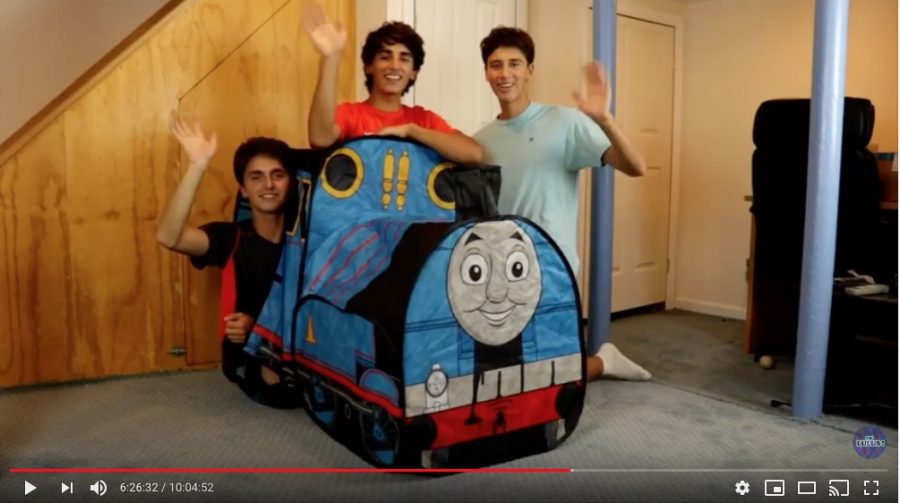 Still from "Wheels on the Bus - Bus Videos, Train Videos, and More Nursery Rhymes for Kids and Toddlers" on "The Lulus."

PMHS alum and recent Princeton graduate Jordan Salama will mesh entertainment and education through the creation of “Lulus America,” a bilingual video series for children throughout the Americas, to encourage cross-cultural understanding. The series will feature children from the United States, Canada and Latin America telling their stories. “Lulus America” will be a YouTube channel associated with the extremely popular “The Lulus TV” and “Los Lulus en Español,” children’s channels Salama originally created with his two younger brothers. “Lulus America” is receiving funding from a ReachOut fellowship awarded to Salama by Princeton.

How did “The Lulus TV” first start?

“It’s funny, actually. The Lulus began in 2010 when my brothers, Jonathan and Michael, and I filmed a video of ourselves singing ‘The Wheels on the Bus’ as a fun experiment. We uploaded it to YouTube, not thinking much of it, and then when we checked back a few years later, it had something like 25 million views, and today, the original ‘Wheels on the Bus’ video has more than 51 million views. We realized there was something to be said about young people making educational and wholesome content for other young people. Today, we have more than 100 videos in both English and Spanish, with a following of more than 700,000 total subscribers and 300 million total views from children and families around the world.”

What should we expect from “Lulus America”?

“‘Lulus America’ will be a digital, bilingual, educational video series for children and families consisting of around 10 episodes, each one featuring a child who has a unique and exciting story to tell. Some examples: the fifth grader in rural Colombia whose books are delivered to her house by a traveling donkey library; the students in rural Mexico who, as part of an old indigenous tradition, are learning how to fly; the girl from California whose ‘diabetic alert dog’ is able to monitor her blood sugar levels. The idea is to foster conversations about empathy and cross-cultural understanding across borders, especially in these particularly divisive times. Even though we may live in different places and different situations, our experiences are more similar than we think.

“The original YouTube channels will stay the same, and we will continue to produce our normal content. Lulus America will be an additional series, almost like a spinoff—at first, it will be released to our online audience, but we are also exploring other possibilities for distribution deals.”

How has your time at Princeton influenced the channel?

“At Princeton, not only did I have the opportunity to gain valuable experience in writing, production and other storytelling skills, but I was able to travel extensively throughout Latin America for various projects and get a real sense of our audience. Wherever I was—on the shore of a river in Colombia, or at a birthday party in Buenos Aires (or even right here in Pelham)—there were children and parents watching our videos and enjoying them. Some of them even recognized me in person! But more than anything, it made me realize that our followers aren’t just numbers. We have a diverse international audience that can be harnessed to communicate important messages for valuable social impact.

“After my freshman year in college, I was an intern for Sesame Workshop’s international social impact department, which oversees foreign-language co-productions of Sesame Street all around the world. Once I developed the proposal for ‘Lulus America,’ they offered to endorse the project and provide me with valuable contacts and advice along the way.”

How were the stories in each episode selected?

“A whole mix of things, really. For example, the first episode we’ll be producing came from my Princeton senior thesis research about a river in Colombia, and the second came from a recommendation from a classmate whose family is of indigenous Mexican descent. Others have come from (non-governmental organizations) like the Wildlife Conservation Society, with whom we’re forming valuable partnerships. The important thing is casting a wide net, gathering as many potential stories as possible, and then narrowing it down. The Americas are huge, and we won’t be able to visit every country or represent every group of people, but we will come away with a diverse group of 10 stories and characters that touch upon a variety of themes like environmental conservation, reading, family traditions, health and wellness and more. It’s a very exciting and dynamic process.”

What will the filming and production process look like? Will you be producing and editing the episodes yourself?

“We’re in the middle of a fundraising cycle to raise an additional $30,000, which will allow us to hire local cinematographers and film crews in each country so that we can produce high-quality content. I’ll be handling all of the behind-the-scenes—the writing, the planning, the finances—but on the ground, I’ll have the benefit of working with professionals who are trained with cameras and microphones at a far higher level than I am. If you’re interested in making a contribution, please feel free to reach out.”

Will your brothers, Jonathan and Michael, be helping with “Lulus America”?

“Both of them will be in college at Princeton this year, so they’ll be pretty busy. But every Lulus project involves all three of us, and I’ll definitely be able to rely on their amazing creative instincts and musical talents to help carry this project from back home. And we’re definitely hoping to travel together for a shoot during one of their school breaks.”

How does the ReachOut fellowship work, and what was the process of your project getting chosen?

“The Princeton 56-81-06 ReachOut Fellowship provides $30,000 grants to graduating Princeton seniors intending to pursue projects in public service. I came up with a pitch for ‘Lulus America,’ and because of my background in storytelling, writing and production, as well as our existing audience, the fellowship committee saw potential in my project and selected me. (Read about that here.)

“Though the ReachOut grant will be covering my personal expenses for the year, I’m currently fundraising additional money to support other expenses—like hiring local crews of cinematographers and sound technicians in each country — that will ensure the highest production quality possible for our episodes. We’re grateful to have received a grant from the Cotsen Foundation as well as other individual donors. If you’re interested in making a tax-deductible donation of any amount, or interested in collaborating in another way, I’d love to hear from you. Please reach out to me at [email protected]”

What do you see “The Lulus TV” franchise becoming in the future? What are your main intentions with this platform?

“We’re looking at some exciting potential partnerships—in addition to Princeton, Sesame Street, and the Cotsen Foundation—to expand our reach. I speak for all three of us—Jonathan, Michael, and I —when I say that we want ‘The Lulus TV’ to continue to be a strong source for educational and entertaining content for children and families. Sometimes that entails three brothers singing the ABC’s or ‘Baby Shark’ on the internet; other times, it means traveling the Americas in search of inspiring stories that will lift us up and allow us to understand each other’s experiences just a little bit better.”

What have you taken away from creating this educational platform?

“I’ve come to realize how important it is to make sure we’re sending the right messages in every video we put out, because when kids watch, they absorb everything—every word, every detail, every story can have an impact. We’ve done well in the past with songs that are already incredibly popular in the world of children’s music: ‘Baby Shark,’ ‘The Wheels on the Bus,’ ‘Five Little Monkeys’… the list goes on and on. But how can we use the popularity of those songs to send the right messages to kids? With ‘Baby Shark,’ it can be as simple as pairing the song with a message about endangered species in the ocean. But with ‘Lulus America,’ we’re aiming to take it a step further by combining that entertaining, quick YouTube style that has brought us success with truly educational, values-driven storytelling.”

What are your career plans and goals aside from “Lulus America”?

“When I’m not producing ‘Lulus America,’ I’m a writer and journalist. I’ve written about Syrian traveling salesmen in the Andes, covered Lionel Messi and the Argentine national soccer team during the Copa America 2016 international soccer tournament, produced a radio feature from a private railroad car that appeared on NPR’s ‘All Things Considered,’ and more. The nice thing about this fellowship is that it gives me the freedom and resources to continue writing freelance stories from all of the amazing places I’ll be visiting. I have an agent now, which is an exciting development.”

You can find links to all of Jordan’s work on his website.