Come try the new at EcoPel’s vegan cook off on Nov. 9 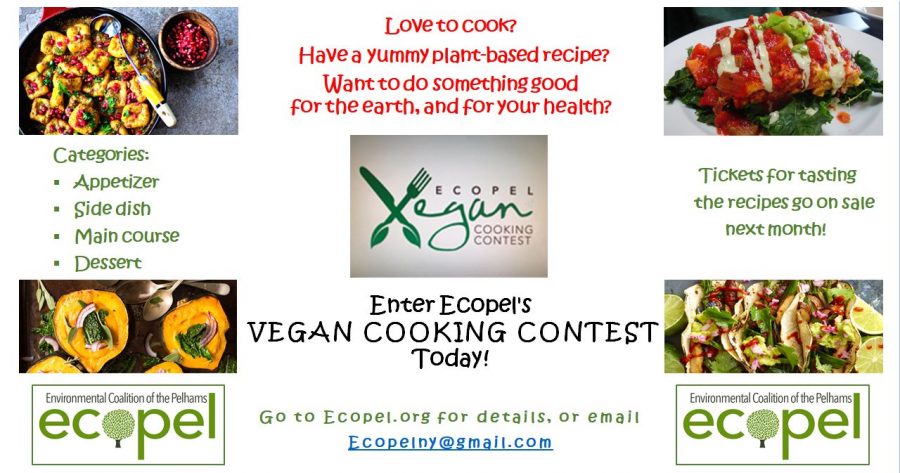 The Environmental Coalition of the Pelhams (EcoPel) will be hosting the first ever vegan cook off on Nov. 9 starting at 6:30 pm. At this event, which will be hosted at a home in Pelham Manor, cooks will bring vegan dishes fully prepared to then be tasted by the three judges (none of whom are vegan): Chance Mullen (Mayor of the Village of Pelham), Clayton Bushong (president, Pelham Chamber of Commerce) and State Sen. Alessandra Biaggi.

The idea for the event emerged from conversations about the climate crisis, and grew from there. “Increasingly, people who don’t think of themselves as vegan (sometimes emphatically not), but who want ways to help combat the climate crisis, are finding that they can skip animal products in a meal with no loss of taste or satisfaction,” said event organizer Marin Zielinski. “We figured that’s an idea worth promoting.”

The climate crisis is a danger threatening to cause upheaval for the across the globe. There are small actions that individuals can take in order to promote the reversal of climate change. Veganism is an example of a small action that makes a surprisingly important impact on the environment.

“It’s been calculated that it takes 50 gallons of water to produce just one egg, for instance,” said Zielenski. “Some groups estimate that eliminating animal products from a diet can lessen a carbon footprint by 73%, and that if everyone became vegan, global land use could be reduced by an astounding 75%. Without question, animal agriculture contributes not just to global warming, but to pollution, deforestation and unsustainable depletion of freshwater.”

The recommendation to eat less meat is supported by the Intergovernmental Panel on Climate Change in their 2019 special report and in the “2017 World Scientists’ Warning to Humanity.”

While the numbers may be debated, the fact is eating less animal products will reduce the damage to the planet. The purpose of the event is to highlight that “eating fewer animals can be easy and even preferable,” said Zielenski.

The funds raised by the event will be used to cover the costs of the catered food, wine and other beverages.

Cooks who want to enter the competition may do so by emailing EcoPelNY@gmail.com. Tickets for the event are on sale and available online only at this link.