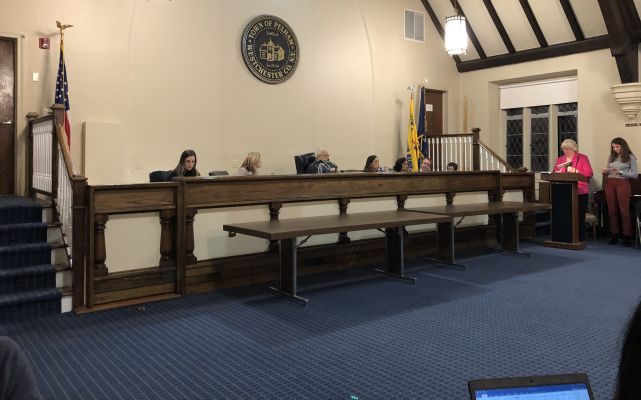 The mayors of the Village of Pelham and Pelham Manor don’t agree merging the two villages will save taxpayers money.

Village of Pelham Mayor Chance Mullen and Pelham Manor Mayor Jennifer Monachino Lapey spoke at a Pelham Town Hall forum of local government officials Wednesday, where they were asked why the villages would not take advantage of a state program that pays 50% of the cost of an impartial study on merging governments or combining services. The state will also pay 90% of the cost of implementing the study recommendations, the questioner said.

Pelham is not “at the point where there is a ground swell, publicly or institutionally, to force the issue, so it’s very difficult to commit to spending funds to figure out something that, frankly, we already know,” Mullen said. “We know that we would save money if we consolidated the Village of Pelham and Village of Pelham Manor… The question is: Is there a path to doing it, does the public want to do it, and I think that debate has to happen first before we then say. ‘Ok, let’s spend,’ whether it’s $10,000 or $100,000.”

Lapey said, “I do take issue with the statement, ‘We would save money.’ There are four classes of taxpayers in this town…non-homestead and homestead in Pelham Manor, non-homestead and homestead in the Village of Pelham. (Pelham Manor Village Manager John) Pierpont, who has studied this at length, has reviewed his analysis with our board and our information is that of the four classes, three would benefit, but the one that would not is the Pelham Manor residential taxpayer. That’s a problem for me because I’m a fiduciary to those people.”

“I cannot say in good faith on the record that the Pelham Manor residential taxpayer would save money or would win with that type of arrangement,” Lapey said.

(The New York State Division of Local Government Services confirmed the existence of the program referred to by the questioner at the town hall. According to the Local Government Efficiency Grant Program document the office provided, grants of up to $50,000 can be awarded for reorganization planning by towns and villages, which would include “an examination of the financial impact of reorganization on all involved local governments, an assessment of potential management and service delivery changes, a review of potential impediments related to reorganization, and a list of recommended steps to complete the reorganization, as well as an inventory of other efficiency options if the reorganization is not completed.” Municipalities must provide a 50% match to the funding for the project, though 40% of that would be refunded if a municipal merger or reorganization went through, the document said.)

(The document said merged towns and villages are also eligible for a Citizens Empowerment Tax Credit equal to 15% of the combined real property taxes levied by the towns and villages that participate in a reorganization—in this case the two Pelham villages and the Town of Pelham—if a new coterminous town-village is created that operates principally as either a town or a village but not both. The aid is provided annually and 70 percent of it must go to property tax relief. The credit is capped at $1 million. The Division of Local Government Services also provided The Citizen’s Guide to Petitioning For Local Government Consolidation or Dissolution.)

Paulin reported Crown Communications, contractor to the New York State Department of Transportation, intends to go ahead with construction of a 120-foot cellphone tower at Exit 7 on the Hutchinson River Parkway in Pelham Manor, despite opposition from Pelham Manor officials, residents and state representatives. She said her office received a letter from the DOT that week, three months after Paulin’s original letter objecting to the so-called monopole.

The response was “not satisfactory at all” and confirmed that Crown was not going to retract its proposal, Paulin said. The assemblywoman said she called the DOT’s deputy commissioner on Tuesday to explain her concerns and was expecting a call back. Paulin also said Pierpont had identified an alternative location for the pole on village property near the Bronx line that could be suitable for construction and satisfy the needs of residents.

Since the 2020 Westchester County capital budget includes money to repave Lincoln Avenue, one audience member asked Clements why this was not the responsibility of Con Edison, “which dug it all up.” Clements said that while Con Ed will close up a road where it opens it for work, the company will not resurface the road or fix sidewalks, as they do not pave it “up to the standard that you need it.” As Lincoln is a county road, the county will repave the road and fix sidewalks and curbs.

From the Village of Pelham’s standpoint, Mullen said there is time before the county starts its work on Lincoln—planning will begin in January—for the village to make changes to improve traffic or pedestrian safety.

Biaggi was asked about progress on legislation pertaining to hate crimes, in light of the recent discovery of swastikas in Pelham Middle School.

“This year we did pass many many different bills to make it very clear to all 20-plus million New Yorkers that there is no place in this state for hate crimes, or for hate speech, or for discrimination because of someone’s religion, or race, or the type of hair that they have, or the type of clothes that they wear, or where they’ve come from,” Biaggi said. “And I think that one of the best ways that we can combat this, in addition to legislation, is conversations and holding space for these conversations, not only with each other as adults but in our schools and in different places.”

In her closing statement, Lapey warned residents in the neighboring Village of Pelham to pay close attention to development projects in the village. “There is a tremendous amount of development proposed for the Village of Pelham, and while this is a very informed and intelligent group, I would encourage people to really pay attention to the tax structures and the implications for things like PILOT—payments in lieu of taxes—that developers might be granted, and how that may or may not affect the base proportions, particularly in Pelham Manor, and we should all understand what’s going on in the entire community.”