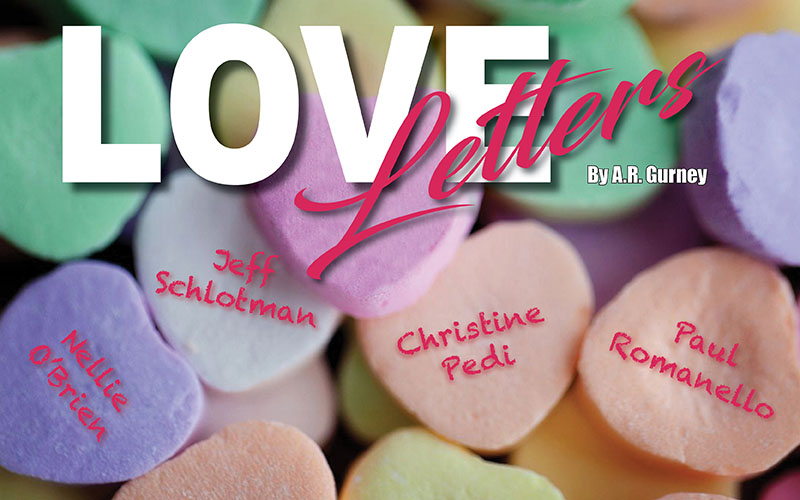 The nature of “Love Letters” differs from the conventional play in that it is designed to be simplistic-yet-raw in its display of human emotion. Actors are purposely given little time to prepare so that the lines are not memorized and rehearsed. Instead, actors must rely on their personal relationship while reading from a script to preserve the genuine feeling between two human beings rather than the prepared delivery of the lines.

“The beautiful thing about the piece is that it allows [myself and Christine Pedi] to come together with not necessarily the same story, but a story nonetheless being very old friends and continuing to be friends, and read a piece like this with someone you have a history with,” said Artistic Director Romanello, discussing the unique setup of the show. “It somehow makes it flow, and allows us to become who we are in our own friendship and just let the performance happen.”

The play, originally having premiered in the late ’80s, follows the friendship of Andrew Makepeace Ladd III and Melissa Gardner. Melissa, born to considerable wealth, and Andrew, born to a more humble environment, correspond throughout their bustling lives through the simplicity of letters. Navigating their way through childhood clichés, teenage angst, and the highs and lows of marriage and life, they rely on each other for support. Their lives diverge, almost becoming polar opposites, but their lifelong companionship gives them clarity through the complexities of life, and reveals how much they mean to each other and the love they share for each other on a spiritual level.

Christine Pedi is the daily host of SiriusXM radios on Broadway channel (Mon-Fri 9 am-3 pm Eastern Time channel 72). Theater credits include Broadway’s “Chicago” (Matron Mama Morton), “Talk Radio”, “Little Me”, and Off-Broadway’s long-running satirical revues “Newsical” and “Forbidden Broadway” (Drama Desk nomination). Christine’s award-winning cabaret shows have played all over the USA, London, South Arica and several of the 7 seas and her 13th annual holiday show “Snow Bizness” returns to Feinstein this December. She can be seen on Youtube and the Howard Stern show for her vocal impressions (“The Lady of 1000 Voices”). Recordings include her solo CD, “Good to Mama”.

Nellie O’Brien has performed in many national and local venues including the Kennedy Center, The Lincoln Center, the Westchester Broadway Theatre, Tarrytown Music Hall, Manhattan Repertory Theater, and more. She has TV, radio, voiceovers, comedy improvisation and cabaret credits, and is the president of Compelle! Communications, a company that specializes in media training, presentation skills, spokeswork, and message development.

Jeff Schlotman has appeared in mainstage productions of Axial Theatre in their production of “August: Osage County” as Charlie. Other productions include the Stage Manager/Narrator in “Our Town”, Froggy LeSeuer in “The Foreigner”, Colonel Gillweather in “Something’s Afoot”, Doctor Zubritsky in “Fools”, Producer Feldzieg in “The Drowsy Chaperone”, Nat Miller in “Ah, Wilderness!”, The Major General in “The Pirates of Penzance”, Saunders in “Lend Me A Tenor”, Henry Higgins in “My Fair Lady”, Ebenezer Scrooge in “A Christmas Carol”, Professor Callahan in “Legally Blonde”, Fagin in “Oliver”, and Judge Danforth in “The Crucible”.

To find more information about SOOP Theater Company and their upcoming performances, lessons, and workshops visit: