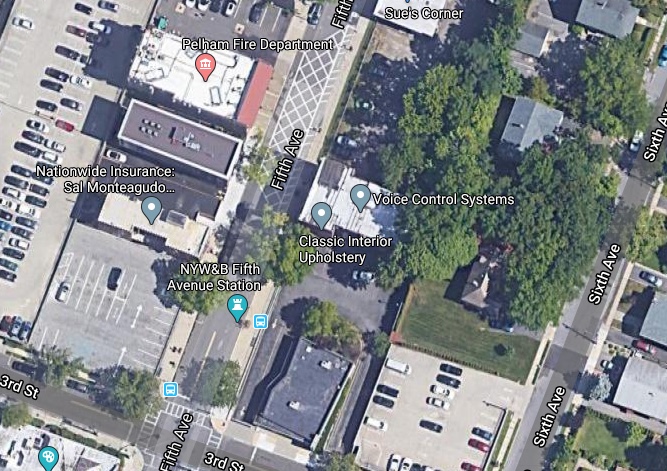 The new Pelham municipal center will be on the former Capital One bank site at 200 Fifth Avenue.

The Village of Pelham Board of Trustees discussed Tuesday delayed plans to construct apartments and a new municipal building to house the village’s government departments.

During the meeting, the board met with representatives of Pelham House LLC, the developer picked to build a mixed-use project that will include the municipal center, following a delay in discussions due to Covid-19. Back in 2018, the board requested proposals to construct the center—to include a new village hall and police and fire stations—along with an apartment building.

The project would, in part, use village-owned land and be entirely funded by the developer.

The pandemic stalled the plans, and the board still hasn’t yet signed the agreement with Pelham House, which has begun designing the properties, said Mayor Chance Mullen.

The village announced a tentative deal with Pelham House on March 3.

“Our downtown was not designed to be a thriving downtown in the 21st century,” said Mullen. “It wasn’t really designed at all. The current zoning effectively prevents new construction. Our downtown was rated number 30 out of 43 in Westchester Magazine.” He said the downtown has a “broken teeth footprint” which “undermines walkability and vibrancy.”

“It’s very difficult for new businesses to come to Pelham due to a non-thriving downtown that cannot provide new businesses with a steady income,” said the mayor. “The value of our downtown is not as good as it should be. The middle school and high school, government buildings, parks and car lots are all not generating taxes. The department of public works, the village hall, firehouse and police station all have separate buildings and are off tax rolls, hurting downtown and homeowners.”

The lack of commercial development has shifted the tax burden to house owners, said Mullen. In 1999, non-homestead properties paid 25% of village taxes, while these properties now contribute 17%.

“Attracting investments is difficult in an area where a property will be less successful year after year,” he said. “The firehouse is worse than it was six months ago. Village hall is not in the best shape or ADA compliant, which is a financial and liability problem. The police station would cost $2.6 million to be ADA compliant and be a modern functioning police station. Safety and functionality insufficiencies need to be addressed to suit the police station’s needs.”

Village facilities need a total of $17.4 million in improvements, Mullen said. (The village police department is located in space in Pelham Town Hall.)

Noting the school district recently issued $52 million in bonds, Mullen said, the village needed “to find creative ways to solve these financial problems instead of putting it on taxpayers’ shoulders.”

“This will be a big change in downtown,” said Deputy Mayor Peter Potocki, who is stepping down from the board this year. “It is so overdue and will be a gamechanger. If this is the last thing I do on this board, it will be one of the proudest things I will do as a trustee and deputy mayor.”

Trustees plan to discuss further planning for the project at the next village board meeting.

In the wake of voting Nov. 3, Potocki said he “watched the community on Election Day. It was the longest lines I’ve ever seen, all day long, since I’ve lived here. Our entire process seems to be a very caring and well-knit community for each other.”

The board is seeking applicants for the climate smart community task force and the newly formed council on the arts. Applications can be submitted here. Mullen said those applying to the arts council should “have experience in the arts and represent the diversity in our village.”

The audited financial statements for fiscal year 2019-20 were accepted by the board, as well as an inter-municipal agreement between the Village of Pelham and the County of Westchester for mutual aid by the police departments.

The board authorized the village administrator to carry forward up to five vacation days into 2021 and to amend the employment agreements of the fire chief and superintendent of public works to include benefits provided to non-represented employees.

With Covid-19 cases rising in the village and town, Mullen said, “Whatever you were doing back in March or April, do it again. Flu season and allergy season is upon us, and multiple Pelham schools have closed.” The mayor stressed the importance of mask wearing and social distancing while in public. “We have a lot of work to do to stay safe. If we see groups of people congregating, we will tell them to disperse, and are not afraid to issue citations for people not following guidelines.”

The next meeting is scheduled for Nov. 24 and can be viewed here.