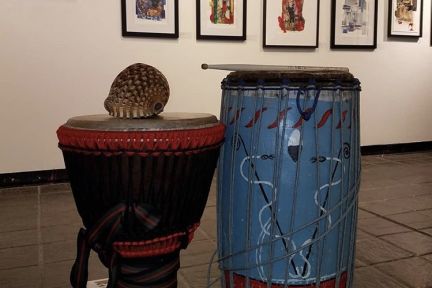 On July 29, the nonprofit organization Haiti Cultural Exchange presented, “Rhythms and Dances of Haiti,” in collaboration with the Pelham Art Center to promote Haitian history and culture.

Haitian percussionist Okai Fleurimont played seven songs and a medley of traditional African rhythms on a variety of African instruments, including his personal favorite, a West African drum called the djembe. Fleurimont also showcased a conch shell and a painted petwo drum from Haiti.

“I use the conch to call my ancestors, to create positivity and color,” said Fleurimont. “It also calms my nerves, as I’m always nervous.”

While drumming, Fleurimont sang lyrics to ancestral songs in Haitian creole. One song he sang was about a 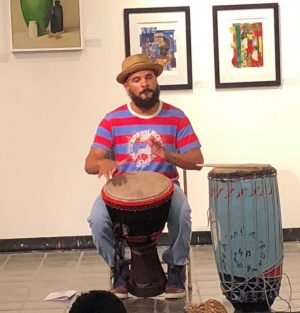 mother seeking a medicine man to cure her child’s illness.

“(The performance was) captivating and really eye opening,” said artist and alternative medicine practitioner Kathy Trippolo. “I was deeply surprised by what I heard.”

In addition to his performance, Fleurimont spoke of Rastafarian ideals concerning food, stating that today’s world needs to return back to nature and healthy eating. Fleurimont also discussed the resilience the Haitian people demonstrated as they overthrew their slave masters during the Haitian Revolution and liberated colonies across South America. He argued that a society must maintain unity in order to triumph over oppressors.

“(My goal was to) educate the audience about the contributions of Haitians when it comes to freedom in the Western Hemisphere,” said Fleurimont.

Fleurimont’s first name, Okai, is the name of the Haitian city where the last battle of the Haitian Revolution took place. It is also the subject of many popular Caribbean folk songs, some of which he performed.

The performance ended after Fleurimont played a song he composed called “Another Day.” In the song, he expressed appreciation for life’s many beauties. 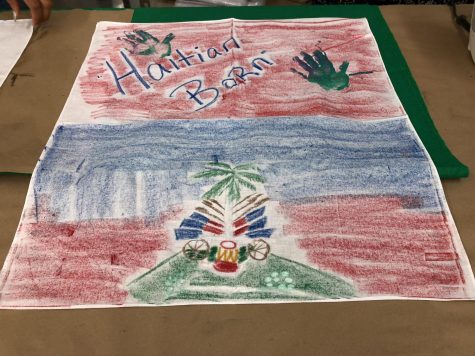 Flag made during workshop

“(I chose to teach the workshop) because I use mixed media and glitter in my work,” she said. “My favorite art style is mixed media.”

Participants could choose from an array of media for their flags, including crayons, markers, dyes, glue and glitter.

“I think the performance was pretty good,” said elementary school student Mark Anthony. “I learned that I might want to be a drummer.”

“The performance was very good,” said a Haitian father. “I am from Haiti, so it was good bringing my family to get a little more exposure to the history.”