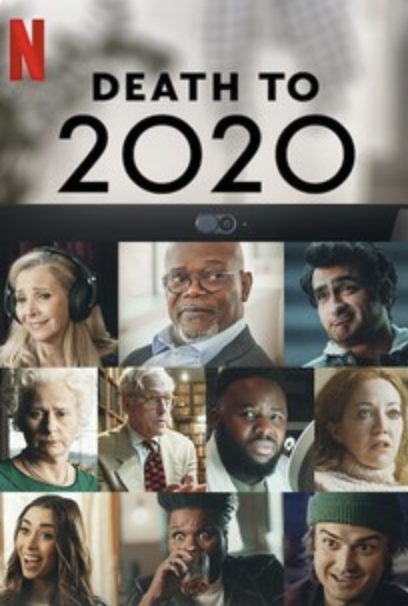 A historic pandemic, the deaths of millions of Americans, raging wildfires, a nail-biting election, Black Lives Matter protests and more. 2020 was quite a year, with many moments being added to future history books. After living through it, one would think to put this year behind them. However, new to Netflix is “Death to 2020,” a film that recaps the year.

“Death to 2020” is a mock-documentary written and directed by Charlie Booker and Annabel Jones, the creators of science fiction series “Black Mirror.” Labelled as a dark comedy, “Death to 2020” pairs the heavy and impactful events of the past year with humorous satire delivered by actors Samuel L. Jackson, Lisa Kudrow, Hugh Grant, Tracey Ullman, Leslie Jones, Diane Morgan, Cristin Milioti and Joe Keery, among others. They play members from the many groups that characterized 2020, such as anti-maskers, activists, millennials, scientists, historians, Trump advocates and the queen of England.

The film recaps the poignant events of the year by combining real life footage from the past 12 months with staged interviews. It is filmed similar to a BBC history documentary and recaps the major events of 2020, some of which you may have forgotten amidst the numerous that happened. The film, though keeping the essence of a documentary, manages to capture the viewers despite the movie being about events they have already lived through.

This film is enjoyable for those who enjoy dark, cynical, deadpan humor, as some jokes might not appeal to the humor of certain viewers. The actors portray their roles of the different societal perspectives extremely well, and help the movie to fulfill its comedic potential. The humor keeps the film from feeling like a depressing history feature, given the heavy and difficult events that defined 2020. Although the film has been met with negative reviews from those who were not entertained, “Death to 2020” was an entertaining way to recap the past years’ events, and will be a movie to revisit in the future. The humorous acting made the film enjoyable while simultaneously representing the devastating events that shaped 2020.

The tragedies of 2020 have marked history and will, hopefully, shape our future for the better. “Death to 2020” will serve as a reminder of all that we have lived through in the past 12 months and will be a way for future generations to learn more about the infamous year. “Death to 2020” is definitely worth a watch if you have the time, and strength, to relive the events of 2020.