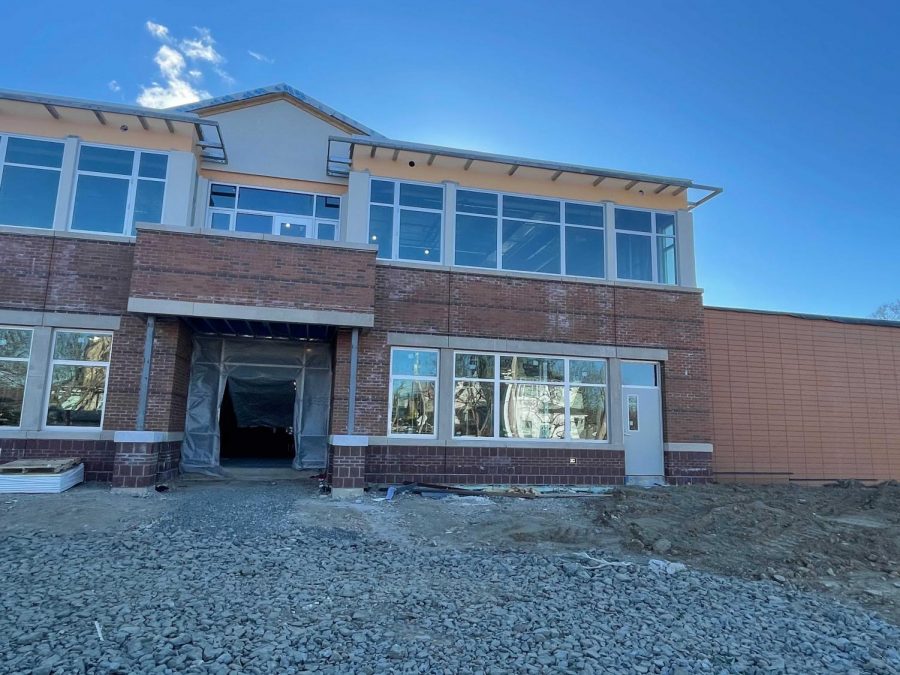 The new Hutchinson School under construction.

The Pelham school district plans to “repair community harm” identified in a racial equity audit by hiring a more diverse staff and examining instruction to “reflect principles and values of inclusivity and equity,” Superintendent Dr. Cheryl Champ told the school board during its regular meeting Wednesday.

“The Pelham school community will develop empowered, adaptable, well-balanced individuals who are equipped to meaningfully contribute to our local, national and global society,” Champ said.

NYU’s Metropolitan Center for Research on Equity and the Transformation of Schools, the district’s racial equity consultants, said in its report the district lacks “a consistent commitment to fostering an equitable and racially just school environment,” citing disparities in the testing performance of white and nonwhite students and a deep need to diversify hiring.  Hutchinson School came up in the report—Hutch is 41% white versus 70% to 75% at the other elementary schools—in a section covering the “lingering effects of segregationist history.” Racist perceptions that start in the elementary schools carry through to the high school, doing damage, the report said.

“The audit talked about Hutchinson and perceptions of Hutchinson,” said Champ. “It is a great example of a complex narrative. I see tremendous pride from community and alumni from Hutchinson, but there are historic assumptions that have arisen over time that we want to address. This work is not meant to lower standards for any of our students. It’s about providing students what they need to be successful and do it equitably.”
Watch the school board meeting here.
The Metro Center proposed the Princeton Plan as a solution for the geographic segregation at the elementary level. Under the plan, the elementary student population would be divided by age, with each building teaching students of certain grades from all over town, rather than each school serving a section of the district. Previous discussion of the plan’s implementation in Pelham received significant backlash.

Neither Champ nor any members of the school board has commented on that recommendation.

“I have concerns and questions about the audit trying to rail the work we’ve been at for nearly a decade, so I’m glad we have the opportunity to address that here,” said School Board President Jessica DeDomenico.

“I hear the concerns, and I don’t disagree with some of them,” DeDomenico said. “It was hard for me to read that audit, and I think this is hard work to do, and it’s hard for communities that are having these conversations, and this work is happening in most communities.”

Trustee Eileen Miller, a member of the district’s cultural competence committee (formerly the diversity committee), said, “I don’t think anyone expected it. We were hearing kids say that they saw differences in how kids are being treated on a day-to-day basis.” She said that the differences brought to the committee’s attention were “microaggressions” that students experienced based on their race.

“This was very different than what I went through when (former superintendent) Dr. Giarrizzo was here, and it lead to two very different strategic plans,” Millers said. “I just want to convey the fact that this was very real and very new. We didn’t hear this information in this way four to five years prior.” She said older students “expressed that they were uncomfortable expressing their views in difficult conversations in classrooms” based on the community in the classroom and the views of teachers.

“When I read the audit, I didn’t agree with all of it, extending to the recommendations,” Miller said. “I’m not disagreeing, but I have questions. We all had issues we needed to better understand and our work is not over.”

“This is our plan, not NYU’s,” said board member Vincent Mazzaro. “The board is determining next steps.”

Board member John Brice said, “It’s hard to disagree with the audit recommendations. How we implement them is entirely up to us.”

During the public comment portion of the meeting, the board heard both approval and criticism of the recommendations in the equity audit.

The Pelham PTAs are “united in support of Dr. Champ and the board of education and are committed to helping advance the district’s strategic goal of cultural competence and the recommendations outlined in the NYU Metro Center equity audit,” said Sarah McKee, president of the Colonial PTA. “By uniting in our support, we are advocating for the wellbeing of every child and committing to work with the district in close partnership, with parents and teachers, to define and implement action items within our schools. We acknowledge there is work to be done to make Pelham schools more inclusive and equitable.”

Ian Rowe, a Pelham resident who has run charter schools, said that many racial audits are “grounded in critical race theory, which is a very divisive and toxic ideology, essentially dividing people by race.” On the Pelham audit report, Rowe said, “There were serious flaws in the methodology, the data collection, the data manipulation, the data representation, the underlying ideology, and so I am distrustful of NYU Metro Center as a partner to continue… The results that they came to were based on preordained conclusions.”

Resident Tom O’Halloran read an email from a parent: “My concern with the Metro Center is their subsequent engagement in the high school. I do not believe these individuals should be given direct access to our students, rather we should be seeking professionals with forward-looking inclusive ideas on how to build a healthier community.”

“Critical race theory is one of the most divisive theories in circulation today,” said O’Halloran, reading another email, this from Charles Mellard. “This is evident in the audit, which does not meet any of the rigor that is required for it to actually be called an audit. An audit is based on a very small sample, and does not specifically specify which wrongs we are seeking to right. I believe we are headed down a divisive rather than unifying path. I respectfully suggest that the process needs to be redone.”

“My only push on the equity audit, because I agree with the recommendations, is I have no idea why it has taken this long,” Ginsburg said. “I was reading an article from the 1970s in Pelham where the Black and white students were talking about how they never sit together at lunch, and then I was hearing students this year talk about how the Black and white students never sit together at lunch. How many reports, meetings and committees until we listen to the young people?”

“We do not need to go into every single methodology to decide there’s a problem. We shouldn’t be concerned that Pelham is going to sound like they are over accentuating race. Students have been clear that we’ve done quite the opposite.”