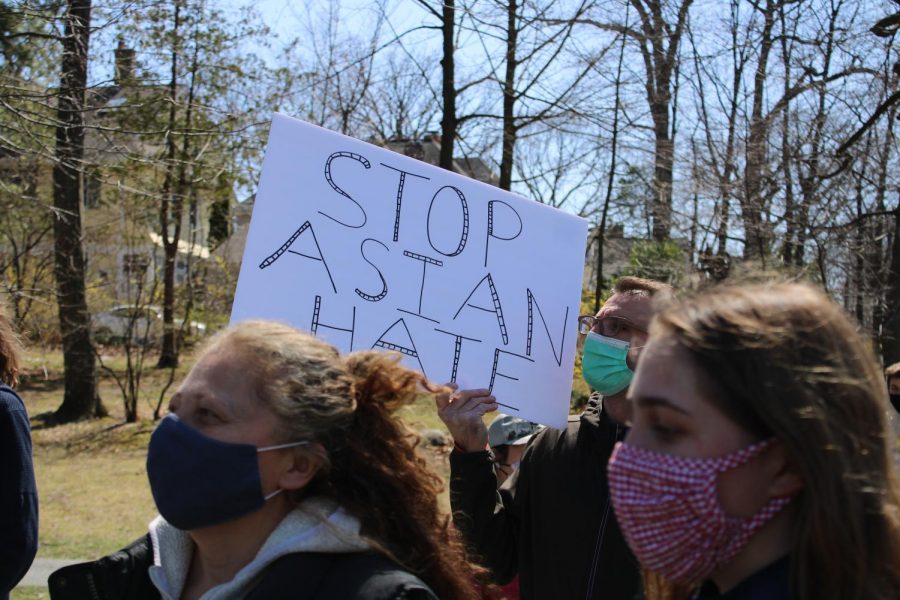 Shouts of “Say their names” broke the sleepy  Saturday afternoon during spring break, an eerie echo of the Black Lives Matter protests of last june. This year, the cries call Pelham to “Stop Asian Hate.”

The protest, organized by Pelham United, was organized in response to the recent surge of hate crimes against Asian people across the US. Calling the names of the six women killed in the Georgia spa shooting, alongside those of other victims of anti-Asian violence, around 100 people called on the town to “stand against hate and violence against the AAPI community,” as Norah Tahbaz , who opened the speeches at Wolf’s Lane Park, said.

Tahbaz read a statement from Linda Toh, daughter of Norah Toh who was attacked recently in White Plains. “Jesus pointed out sins, he did ignore sins… this is also loving your neighbor,” read the statement.

The theme of speaking up and out when witnessing racist behavior was strong. “We cannot fan the flames and then wonder how the fire got so big,” said Nadine Leesang, a PMHS student, in reference to complicity. “We need to address the hate in our own community.”

This message was echoed by State Senator Alessandra Biaggi, who, via an aide, sent her support to the AAPI community, and her sponsorship of S70, which would make data pertaining to hate crimes more accurate and available. Assemblywoman Amy Paulin also announced her support and the 10 million dollars that will be allotted as a part of the state budget specifically to address anti-Asian hate.

In addition to the messages of support, many speakers, ranging from sixth grade to professors of 30 years, stood up to share their experiences of racism in the Pelham community. Dr. Andrew Lee, a Pelham resident, told the story of his son’s experience with racism following a sports game, saying “racial violence doesn’t need to be physical to hurt.”

Pelham student Olivia Min, recalled in middle school, “holding my eyes open just a little too wide, hoping it would shut everyone up.”

A comment Cafe Ammi owner Mike Ammirati posted on Facebook was referenced by a few of the speakers. The screenshot of the comment had been reposted by a Pelham student on Instagram. Ammirati’s comment reads, “Chinese Virus!!! Is that racist!?! Too bad!”

Ava Knickerbocker, another student, spoke about her grandparents and how they had lost a year unable go outside because of Covid-19. “Now, despite being vaccinated, the fear of being assaulted haunts them, indefinitely,” she said.

Village of Pelham Mayor Chance Mullen voiced his support of the AAPI community in Pelham, stating, “we are one community and we stand with you.”