‘I Care a Lot.’ has a star-studded cast, but is unsatisfying in nature 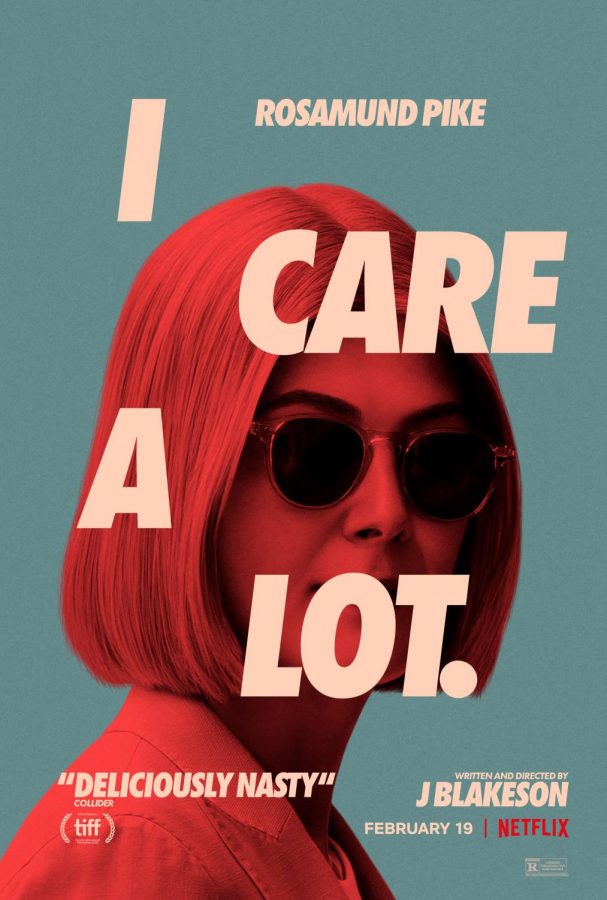 It is often hard to enjoy a film when there is no charismatic lead to give the audience someone they can empathize with. Marla Grayson (Rosamund Pike) is a perfect example of this, making her hard to relate to despite being the “protagonist” of the movie. Although I consider Marla to be a poorly written character, Pike delivers a tremendous performance displaying the true wickedness of Guardianship Abuse.

The film starts off by introducing the cruel con artist and protagonist, Grayson. Grayson’s scheme is declaring helpless retirees incapable of taking care of themselves through court order. Similar to Nurse Ratched from One Flew Over the Cuckoo’s Nest, Marla keeps constant control over the elders in the facility by taking away their cellphones to changing their supplement quantity as she pleases. This immediately sets up the viewers to dislike Marla for taking advantage of dozens of senior citizens and keeping them hostage in her care facility.

Marla Grayson’s character would work almost perfectly as an antagonist in most films. With her cold hard ambition, razor-sharp blonde bob, and vape pen, she intimidates the viewer and seems almost unstoppable when against her opponents in court. When debating, Marla’s icy confidence, persuasiveness, and vast knowledge of the court system allows her to reign queen of the courtroom, leaving her adversaries speechless.

Grayson’s business runs smoothly until she decides to pray upon the wrong woman, Jennifer Peterson (Diane Wiest). Peterson, a woman who seemingly has no living relatives and a large fortune, is the perfect candidate for Marla to extort from. Little does Marla know that Peterson is just an alias of an elderly woman who happens to be the mother of Russian mob boss, Roman Lunyov (Peter Dinklage).

“Playing fair is a joke invented by rich people to keep the rest of us poor” says Marla at the beginning of the film. Marla is a hustler who will not hesitate to defy the common man’s morals to achieve wealth. She declares that she is not afraid of men because they are always full of empty threats (though it is ironic that Lunyov, somebody who can be described as “Half a Man,” because he suffers from dwarfism, gave Marla the most trouble). Throughout the course of the film Lunyov desperately tries to release his mother from the care center by sending armed men to the facility and even attempting to murder Marla.

Though this film’s flaws were particularly evident, it showcased some great performances from beloved actors Peter Dinklage and Rosamund Pike. The film is quite engaging at times, fueling the viewer’s curiosity about what will happen to Marla next. Unfortunately, the film suffers from a poor character dynamic, leaving the viewer with a sour taste in one’s mouth.

If you’re watching this as a family or with somebody of a younger audience this movie is not recommended due to its R rating and mature scenes. This film would be most enjoyable for those who appreciate good acting and are curious to learn more about the atrocity that is Guardianship Abuse.