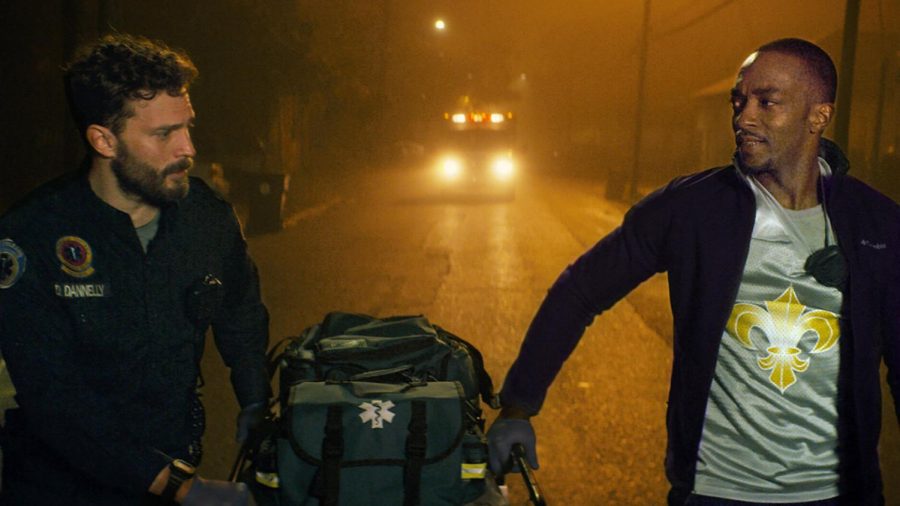 The film is set in present day New Orleans and follows the lives of two paramedics. Steve (Anthony Mackie), and Dennis (Jamie Dornan), are two friends who work together on cases. Steve is an unmarried cancer patient who is dependent on drugs and alcohol to carry on with daily life. Dennis is a married father who has a strained relationship with his wife and daughter, and is overly focused on work. While working on cases where people have died in mysterious ways, they realize the deaths are all connected to an experimental drug called synchronic. When Dennis’s daughter goes missing after taking the drug, Steve and Dennis must figure out a way to find her.

The film combines old themes of time travel and science fiction with present day societal problems. Benson uses a lot of slow shots and bleak lighting to invoke a feeling of uneasiness in viewers. “Synchronic” is also quite scary, with a number of thrilling scenes and scares. There is also a good deal of violence and blood, those who are easily unnerved and scared might want to steer clear of this film. The soundtrack is unvaried but does the job, and it further promotes the grim and suspenseful mood that Benson is trying to convey. The plot is straightforward but interesting, viewers will be intrigued by its take on time travel, and psychedelic drugs.

While “Synchronic” is entertaining overall, some bad writing, plot holes and one dimensional characters take away from the experience. The ending is satisfying and climatic, but leaves questions unanswered. The movie is enjoyable,  though, and I would recommend it to those who enjoy a good science fiction thriller.

Those with free time on their hands and a predilection for science fiction should definitely look into “Synchronic,” which will have viewers on the edge of their seat with its thrilling scenes and interesting plot.