‘Halston’ is glamourous and picturesque, but does little to build its characters 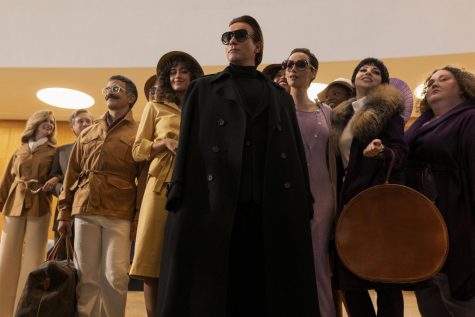 To classify Netflix’s show  “Halston” as anything but extravagant would be an understatement. Roy Halston Frowick, or as the world came to know him by, Halston, was once a contender for the title of the world’s biggest fashion designer, along with the likes of Calvin Klein and Ralph Lauren, both of which are prominently featured in the show.

The set design, acting, and, as excepted, costume design is all impeccable. These aspects steal the show while others, like writing and pace, take their toll, but not in ways one would predict.

The story follows Halston (Ewan McGregor) and his uniquely stylish and lavishly captivating life. The show utilizes a non-linear storyline that consists of flashbacks into Halston’s past. These flashbacks explain the beginnings of Halston’s problems which the show primarily focuses on. “Halston” also delves deeply into the designer’s personal life. At the beginning of the show, one isn’t necessarily sure if they should like Halston or not. He is very snippy, impatient, and oftentimes rude. It’s as the show unfurls, and the viewer is able to see Halston’s brilliance and true artistic capability, that the viewer is able to really enjoy the show and grow fond of Halston.

Halston is portrayed marvelously by McGregor. The casting director couldn’t have done a better job of choosing him. The absolute best part of this show is his performance. Right at the start, we hear his semi-southern accent snap at everyone who speaks to him. The tone is so unlike Ewan McGregor’s real British accent, but he pulls it off so casually and swiftly. McGregor encapsulates the complete stardom and luxury that surrounded Halston at this time but does it with grace and believability. Another noteworthy performance is Krysta Rodriguez’s portrayal of Liza Minnelli. She is unbelievably charismatic and fun in this show. From when she’s on stage singing to when she is simply conversing with other characters over dinner, she dominates the screen.

“Halston” also has one of the best set designs in any show. Each set piece is so meticulously put together; it’s hard not to pause the screen and look for a few seconds longer. Along with this, the picture looks incredibly crisp and clean. This picture detail is complimented very well with the lighting, which never feels too dark or too light. The overall visuals of this show are very impressive, but where visuals dazzle, the writing and direction fail to shine.

“Halston” is by no means a boring show. Most of the time, the characters are written to entertain and keep audiences glued to the screen. This is a good writing tool because fashion may be a boring topic to some. But the writing was very underwhelming in dramatic scenes, and there were plenty of those. “Halston” deals with drug addiction, childhood abuse, and incredibly hectic relationships within his personal life and his career. This causes a lot of scenes to be serious by nature, but the writing doesn’t make them feel very serious like they’re supposed to. The only aspect making the scenes believable in their seriousness is Mcgregor’s jaw-dropping acting.

Furthermore, there are a handful of instances where the story shifts to one month before the event that just occurred. This felt completely unnecessary and confusing and certainly didn’t serve a purpose. Additionally, some characters are  not explored to their fullest as well, leaving an unsatisfied feeling.

It is to be noted that “Halston” gives excellent representation to members of the LGBTQ+ community, and gives insight into what it was like to live as an LGBTQ+ person in the 1970’s. This show does a great job of showing the audience how inclusivity is always the right thing. It is also unapologetically intimate and doesn’t feel the need to censor pretty much anything. Audiences should know that there is nudity and sexual content throughout, as well as a great deal of drug use.

By the end of the show, viewers most likely won’t be left with anything concretely meaningful. They will, however, be left in awe by the production design and the incredible camera work. The amount of detail and hard work that went into this show is impressive, but things that the director couldn’t control, such as the story and script, hold this show back from reaching its full potential. McGregor’s performance will leave audiences speechless though, and if they are into fashion, then this is a must-watch. For me, as someone who doesn’t know very much about the fashion industry, the show was still entertaining and quite enjoyable.