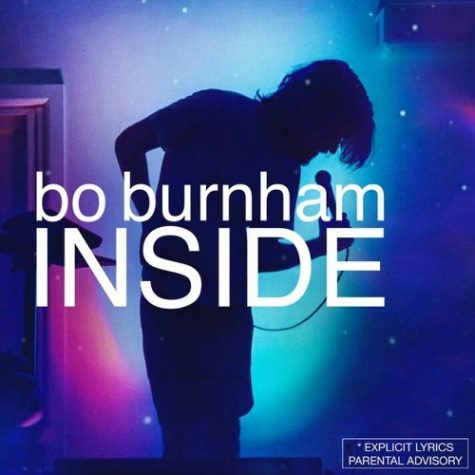 WARNING: This review contains major spoilers in the fourth paragraph. Read at your own risk.

Bo Burnham’s Netflix special, ‘Inside’, transports viewers to a place not too distant; one that we’ve all lived through: self-isolation. Though this might seem like a familiar scenario (being trapped in your home due to Covid-19), the special quickly becomes an incredibly existential rollercoaster of songs and uncomfortably real monologues. The show grapples with Bo Burnham’s deteriorating mental health and all of his crude, crass and insightful thoughts about the physical and digital world. Most importantly, it demonstrates how he, and thereby how one, can cope with their worsening mental health. In Bo’s case, his aid was writing, filming, singing and editing this fantastic narrative of isolationist life.

In essence, ‘Inside’ is a musical with one single filming location: Burnham’s tiny studio apartment. Because of this, the show might be thought of as intrinsically boring.  During my watch, however, there was never a moment where I was even slightly bored. Bo utilizes his musical abilities with incredible precision, pulling off songs with ridiculous titles like “White Women Instagram”, to more emotionally intact songs like ” Possible ending song.” Somehow, Bo creates visuals that are stunning by utilizing fog machines, projectors and light machines, all on the same backdrop of a plain white wall in his tiny studio apartment.

Upon first inspection, the storyline seems to be nonexistent yet ominous. But with further contemplation, it becomes apparent that the songs are being used to chronicle Bo’s mental health during the pandemic. The beginning of the show begins with lighter and more trivial pieces of music about unpaid interns, turning thirty and even jesting at Jeff Bezos with a song titled ‘Jeffery Bezos’. As the special continues though, increasingly heavier topics such as depression, disillusionment and disassociation are sung about. In the few monologues between the music too, Bo is seen becoming more irritable and increasingly unhappy. In one monologue, Burnham fails to completely address the viewers similar to the beginning and instead throws a microphone stand on the ground and turns off his camera.

The special ends with Bo exiting his home for the first time only to see something in the distance that the camera doesn’t show. Bo then turns around and tries to frantically go back inside, only to find that the door is locked. Then he pulls on the handle until he falls on the ground while a laughing track is being played in the background, suggesting what Bo saw were all the people in the crowd making him want to return back to his home. The show then cuts to Bo’s face in the audience, only giving a tiny smirk after staring at himself for a while. This illustrates his self-awareness of the absolute absurdity of what he just gave to the audience and reminds the viewers of the craziness we all had to experience too while self-isolating during the pandemic.

As someone who was only very vaguely familiar with Bo Burnham prior to watching this special, I greatly enjoyed this show and now have immense admiration for Bo and his talent along with his unapologetic, blunt realness. He lets the viewer know exactly what he is thinking about, completely unfiltered, with complete disregard of any possible negative reactions the viewer may have. He makes all of this show his own and gives us insight into his hysterical and wild brain. With undertones of longing and desperation, this special excels in making the viewer care for Bo and his journey. Familiarity with Bo prior to watching would only enhance the experience, but going in completely oblivious is still considerably enjoyable. What’s more impressive is that everything is created all within the walls of Bo’s home. Watching ‘Inside’ will give viewers a greater understanding of not only Bo’s but the human psyche altogether, while still being a hilarious watch.