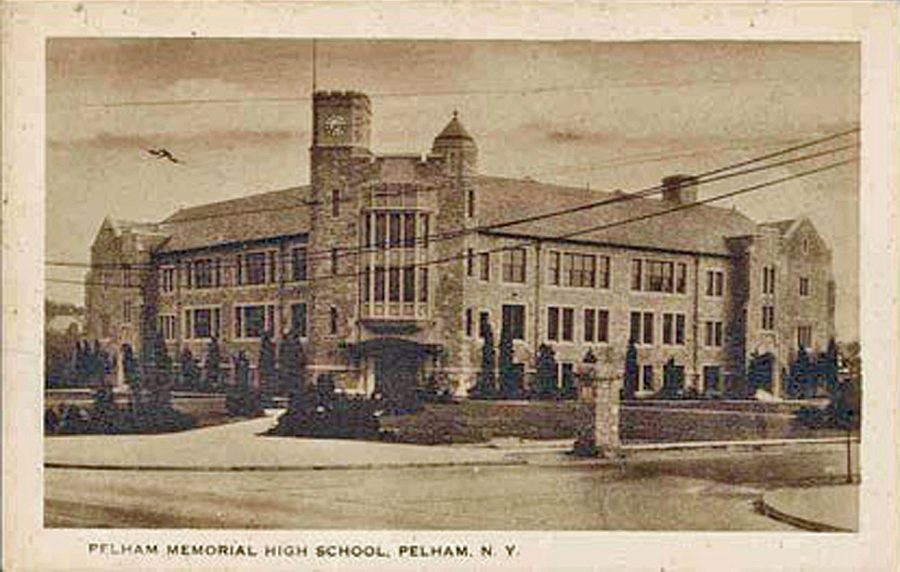 The years I attended the high school, we had 19 twenty-minute periods a day. The school day would block out from two periods to five or six periods for a class. This allowed for science experiments or a book report to be completed in the classroom. I never met any students from any other high school who attended a similar school day. In retrospect, I came to realize what an excellent high school education I was fortunate to receive at Pelham Memorial High School.

Take your books and get out, and take your friend with you

When Mrs. Evelyn Jenkins Gunn (our amazing 11th grade English teacher) said to me when she saw me talking to Chloe Williams for probably the tenth time during class: “Grosso, take your books and get the hell out, and take your friend Williams with you.” And I said, “But where do you want us to go?” And she proceeds to add, “The library, the cafeteria, McDonalds… just go.” We absolutely loved Mrs. Gunn and miss her terribly. She came to our ten-year reunion, and when Chloe and I were checking people in, she said, “You two again? You were like sisters!” We love you Mrs. Gunn! 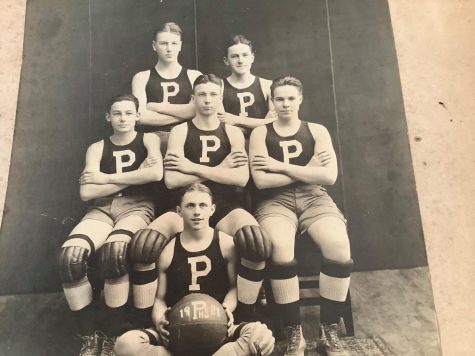 I believe this is a photo of the last Pelham High School basketball team when the high school was housed in what is now Siwanoy School. The date on the ball is 1921, but it is probably from winter 1921. My father Howie Smith is holding the ball.

When I was in ninth grade, in 2005 or 2006, I had John Orefice as an English teacher, who I assume a lot of people associate with fantastic memories of Sock ‘n’ Buskin productions and impassioned performances in-class as Don Quixote. But in particular, I had an experience in his class the day we took a short walk from his classroom to the empty auditorium to perform some Shakespeare. It was “Macbeth,” and several of us took on roles. I took Lady Macbeth, donned a wig supplied by Mr. Orefice, and was seen, in a way, as a woman for the first time.

I hadn’t realized I was transgender yet, at that point. I don’t think anyone suspected it, and of course, cross-casting was the norm in Shakespeare’s time; the women were played by men. But… I wasn’t made to feel like I was a guy playing a woman. I was taken as Lady Macbeth in the moment, and it was a memorable and enjoyable performance with and in front of my class.

Jumping to senior year, my friends and I wanted to do something special for the senior talent show. I’m not sure if they’d want to be named or not in this memory, so I will avoid doing so, but I very much do appreciate them all still. We decided on a popular dance from an anime at the time, and the three main dancers were all girls in the original. I wanted to be one of them, so I borrowed a skirt and a wig from one of my friends also doing this and sewed a bit of the rest of the outfit, and only first assembled the outfit in the second floor hallway outside the auditorium. I looked at my reflection in the glass of a door and felt an amazing happiness where I didn’t want to take the outfit off each of the two nights. So for the second time, PMHS was the venue of my egg finally cracking and me starting my conscious journey of realizing I was a woman.

At the time, I didn’t really know of any trans people at school (though there might have been some and I had no idea). Certainly, it was not a common topic to bring up. But I didn’t feel like I was being pressured into gender norms at PMHS, and I felt like my time there helped me with my initial attempts at figuring myself out, not just in gender but in a lot of other directions as well. And now, recently hearing about the push to have gender-neutral bathrooms in PMHS, I’m so glad that the school has only increased its ability to be a safe place to figure yourself out as a teenager. 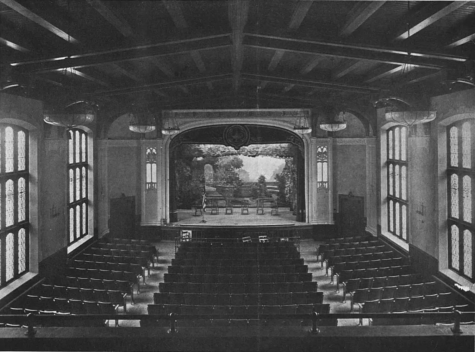 Working the lighting board on the production of “Jesus Christ Superstar!!” Just one of the amazing productions during my time there!!

New wing opens at PMHS—and world changes forever with assassination of JFK
Nov. 22, 1963 was a Friday. We had completed our freshman football season the week before, and we were about to receive our freshman letters after school that afternoon.

The start of the school year in the fall of 1963 included two innovations: one was the “new” wing, forming an “L” with the 1921 original building by extending along Franklin Place toward Wolfs Lane–the new wing had science rooms and labs on the top floor, math classrooms on the second floor and vocational spaces on the ground floor. The second innovation was a revised schedule: 17 20-minute periods, each period separated by 3 minutes; this allowed flexible scheduling for larger science group and lab periods, and a regular class would be 43 minutes. Three minutes made it pretty difficult to go from gym (shower!!) to a class on the top floor of the new wing.

At the time President Kennedy was shot in Dallas, I was in Mr (Vern) Wehr’s ninth grade algebra class, and my class after that was in study hall in the auditorium, proctored by another math teacher, Mr (Harry) Rudy. At one point, I saw an older girl, Lida Burpee, who lived around the corner from us on Wolfs Lane, leave the auditorium crying, and shortly thereafter, Mr. Rudy announced the awful news, accompanied by a heartfelt, as he usually did, “Dear children….”

I don’t remember returning to Mrs. (Barbara) Guiduli’s homeroom in the new wing, as we usually did at day’s end. I do remember gathering to receive our football letters in a room off the first floor corridor to the left of the main entrance from Mr. (John) Lohrfink, our coach, a PE teacher and later vice principal. It was a pretty subdued gathering, and as we left the building, we didn’t realize at the time we were entering a world irrevocably changed. 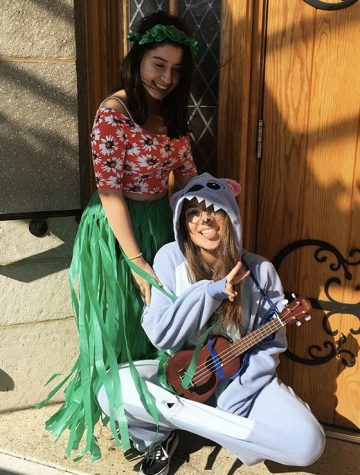 Among all of the incredible high school memories, one of my favorites would probably be dressing up for Halloween during senior year. I was Stitch and my lovely friend Karla was Lilo from the famous Disney movie. It was so great seeing my grade show their creativity in their costumes and come together to take photos at the end of the day.

Running to ladies room to roll up skirt—and down again to avoid Mom
I was infinitely familiar with every ladies room and how much time it would take to rush down or up the hall from my classes to get there. Reason… to either roll up my skirt or to pull it down. My Mom often worked as a substitute teacher (Florence O’Connell), and I was not allowed to have my skirt above my knee. Pants were not yet allowed, so in order to feel comfortable and fit in, I had to resort to a life of hallway running. My friends would help out and grunt loudly if they saw my mom coming. I was often late to class because of this ladies room tag game. I eventually was sent to the office and had to fess up. I believe it was the following year when pants were allowed, and then my mom and I disagreed on having nice worn holes in my jeans. Such a great school and one I fondly remember. I was lucky to live in Pelham and attend a school so rich with some of the greatest teachers.

That great time dancing at the prom

One of my PMHS memories is going to senior prom. We had a great time dancing.

So many awesome memories from PMHS. It was all wonderful. We were so lucky to grow up in such a special place! From great friendships since Kindergarten to making new friends when the four elementary schools came together in junior high. From playing softball and volleyball to being a cheerleader and also starting the ski team… The adventures never ended. So proud to grow up in Pelham!

‘Our life together began at PMHS, and I thank God for that study hall’

I met my husband of 53 years in study hall at PMHS in my junior year. Bob had returned to Pelham after a few years in Switzerland. We’d never met. We found ourselves exchanging notes in study hall due to a crush I had on another boy. He knew him. I also remember going to Parkway Field to watch the runners on the track with my friend, Sally Daigh. I saw him again. Great legs. In the Memorial Day parade, he was carrying the American flag with the Boy Scouts. I knew he was the one. Our life together began at PMHS, and I thank God for that study hall. Fifty-three years later, we’re still writing notes.

Pelham was my home since my birth. I will always be grateful for the village life so close to New York City. Perfection. Loved being in the Sock ‘n’ Buskin shows, singing the Hallelujah Chorus every Christmas and performing folk songs of the 60’s in talent shows and cocktail parties with Michael Card.

Pelham Memorial High School was an extraordinary school with the best teachers. I think it was on par with private schools. Even though I was not an accomplished student, I thank them for never giving up on me.

Send us your high school memory as the Pelham Examiner celebrates the centennial of PMHS.