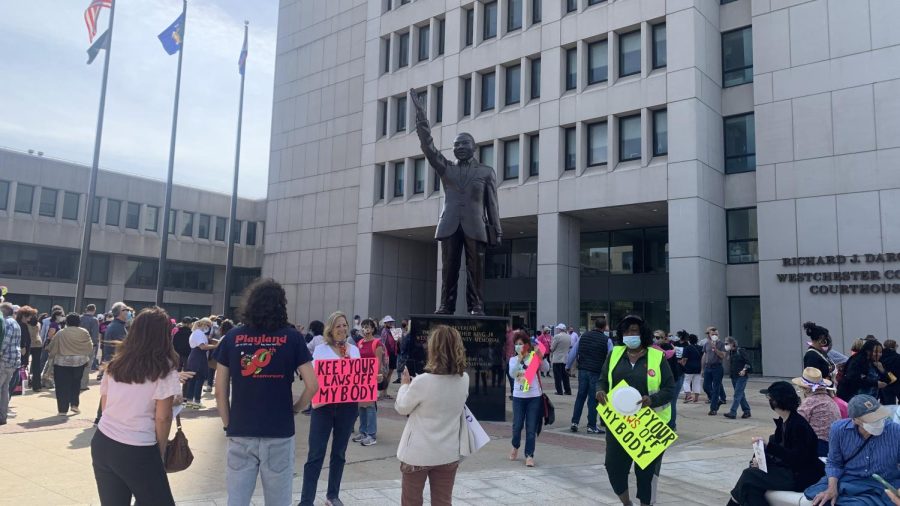 Sponsored by the Progressive Women of Pelham, among 30-plus groups, the rally was visited by many local politicians, including State Sen. Alessandra Biaggi, Mount Vernon Mayor Shawyn Patterson-Howard, Rep. Mondaire Jones and Rep. Jamaal Bowman. Speakers urged the rally goers to vote in their upcoming local elections to protect abortion access in our communities.

The following are some of the comments made by politicians at the march.

“Let me tell you about one more young girl in ninth grade. She was raped,” said Paulin. “She was a political junkie, and used to go to what we used to call ‘the club’ in Brooklyn. That’s how they organized politics. And one day, her usual ride home wasn’t available. So Steve Beam, nephew to the then-upcoming mayor, drove her home, and raped her. That 14-year-old girl didn’t get pregnant, but it impacted her entire life. And now that young girl is standing before you, and she is a New York State assemblymember, and I am never going to be satisfied until every single young woman from Texas and Mississippi can come to my state… so let’s bring them here, let’s raise money. Let’s bring them here to our state. We cannot sit back and march anymore. Marching is over. Action is what we have to do.”

“Passing the Abortion Access Fund will provide funds to make abortion not only a right, but also accessible,” said Biaggi. “It will provide for things like transportation and childcare and funding for the service itself. It is essential, and it is what New York can do next. But that’s not all we can do. In New York, we have something called the voluntary intoxication loophole for rape. Which means that if you go out and have a drink or two, and are raped, prosecutors cannot bring a case for victims of rape. Yes, it is true… So what I’m going to leave you with is this: Think about your ritual of democracy. Think about what you are good at, what you are powerful doing. And then bring others in with you, and enroll them to make sure that we are able to protect our right to choose, because yes, it is a woman’s right to choose, but this is also an issue that affects trans individuals, and we have to make sure that their voices are risen up as well, and stop taking ‘no’ for an answer and fight back!”

“When we’re talking about women’s rights, unfortunately, it’s not just about reproductive rights,” said Bowman. “It’s about equal pay for equal work. It’s also about making sure our women, disproportionately Black, brown and immigrant, and the healthcare system, and our care providers, are paid a living wage. It’s also, as we all know, about the maternal health crisis, and the maternal morbidity crisis. We are the wealthiest nation on earth. And we lead the developed world in maternal morbidity! For all women! And when we talk about Black women, it’s clear that there’s systematic racism and systematic murder happening in our healthcare system when it comes to our Black women. That ain’t right. That is inhumane, that is evil, and we can and we must do something about it. So, we are here today in love and solidarity, fighting for justice, fighting for women’s rights and women’s health. But we can’t just be here today. We gotta be here tomorrow, we gotta be here next week, next month, next year… we are moving in love, and we will continue to move in love. God bless you, I love you, let’s continue to get to work!”