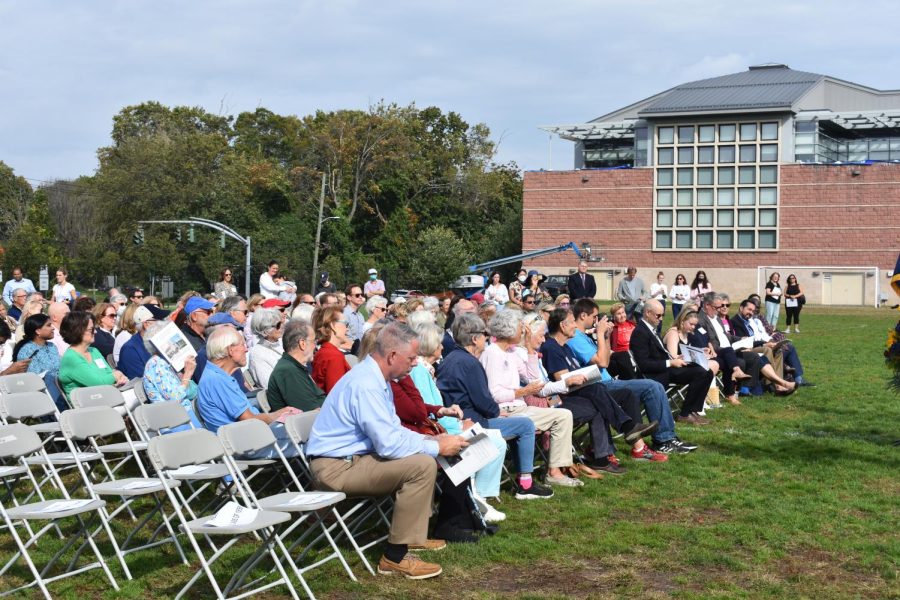 The official celebration of the Pelham Memorial High School centennial Saturday included speeches, photographs, music and historical artifacts on Ingalls Field as well as tours of the school. The school opened for students in the fall of 1921.

The centennial committee, composed of school administration, faculty, teachers and current students, chose for the centennial celebration to be close to the date of the cornerstone laying back on Oct. 18, 1919. The committee also gathered old photos and text from archives to create decade by decade posters reflecting on the past 100 years in the building, which were displayed around the field.

The opening ceremony included performances by the high school jazz band and chorus and various speeches by PMHS Principal Mark Berkowitz, Board of Education Vice President Sue Bratone Childs, Superintendent Dr. Cheryl Champ, and SA President Caitlin Winston. There were also veterans at the event, taking time to pay tribute to Pelhamites who had died in past wars, reading the names of those who served. Also present were current Pelham residents as well as PMHS alumni; members of classes spanning from 1956-85. The PMHS Class of 1956 had their reunion coinciding with the centennial celebrations, and enjoyed a tour of the building after the ceremony.

The formal ceremony was closed with a rendition of the school song “Pelican Parade” by the chorus and jazz band, and members from all classes sang along with the chorus.

The decade posters contained countless pictures and  information about each decade at PMHS, presented in a way in which one could walk along and learn about the school’s rich history while also embracing its sentimental significance. Another element to the showcase were several tables complete with artifacts, some even dating back to when the school first opened, such as yearbooks, several editions of the Pel Mel and Door Magazine, and even old letterman jackets and sports bags. Alumni, residents and current students and staff walked around the field and examined the artifacts; showcased with large smiles on their faces, reminiscing about their memories in Pelham, exclaiming to their past peers, “Do you remember this?!”

After the ceremony came to a close, Pelham residents and alumni were taken inside the school for student-led tours throughout the day, oo-ing and ah-ing about how much the school had changed and/or stayed the same since their last sight of it. Seeing the historical and emotional significance of the school as well as multiple generations’ reactions to it was truly remarkable.

“What truly makes our school special is not the hundred-year-old halls, but all of the amazing students who have walked through those halls over the past hundred years,” said Winston.