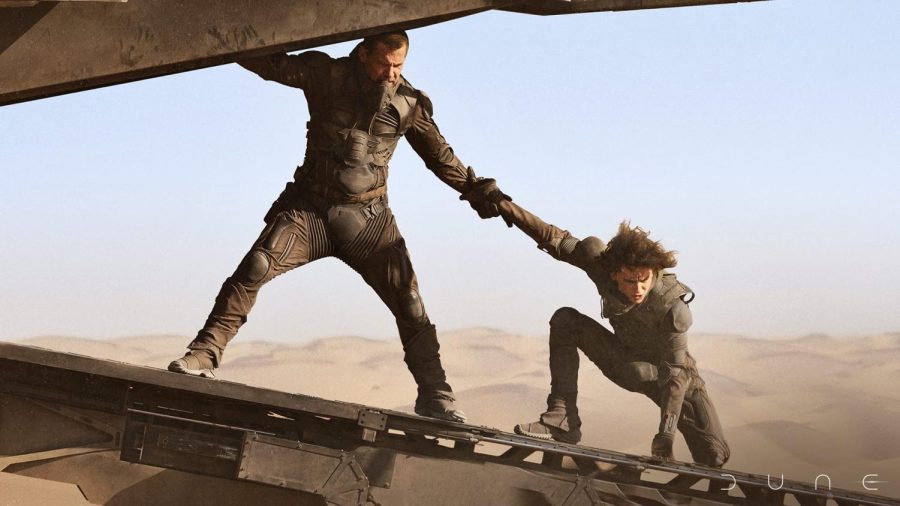 Acclaimed director Denis Villeneuve’s new science fiction epic “Dune” has a daring setup—futuristic spacecraft and technology, intense sword fighting, gigantic man-and-machine-eating sandworms and Timothee Chalamet—but it does more than enough to justify the film’s premise. “Dune” is stacked with beautiful shot after beautiful shot, a technical marvel brilliantly scored and edited. The plot is gripping and engaging for the whole 2 hours and 35 minutes of runtime. Many have thrown around complaints that “Dune” ends without a strong resolution, but those critics have missed the point of the ending entirely. It is understood from the opening titles that this is “Dune: Part 1,” as Villeneuve opted to split Frank Herbert’s 1965 classic science fiction novel in half, banking on a sequel being made. “Dune” tells this first half of Herbert’s story perfectly, both artistically and technically.

In order to understand how marvelous is this new interpretation of “Dune,” it is important to understand the story’s history. Herbert’s novel is considered a literary marvel that has has inspired filmmakers and authors alike. For example, viewers will notice that “Dune” shares plot elements with James Cameron’s iconic “Avatar,” said to have been partially inspired by “Dune.” Others have drawn comparisons between “Dune” and the Star Wars franchise and “Game of Thrones.” Acclaimed director David Lynch made a widely panned adaptation of “Dune” in 1984, and this new version set out to correct that mistake.

The vast “Dune” universe is filled with complex lore and backstories, but this adaptation manages to adequately streamline the story into something that is comprehensible to the audience, and yet still keeps to the rich story of the book. The plot centers around two rival noble families—the honorable Atreides and the vicious Harkonnens—who they are pitted against each other for control of the desert planet Arrakis (also called Dune), which is the only source for “the spice.” Spice is a psychedelic substance that allows for new space travel routes to be found, making it the most valuable substance in the universe. The protagonist, Paul Atreides, played by Timothee Chalamet, is forced to face the danger of the brutal Harkonnens as his father, Duke Leto Atreides (Oscar Isaac), takes over Arrakis. Paul’s mother, Lady Jessica, played brilliantly by Rebecca Ferguson, struggles to keep her son safe as the forces of the Harkonnens swoop down on them. Meanwhile, both families struggle to find the Fremen, the natives of Arrakis who have a greater understanding of desert power and the spice itself. The stacked supporting cast includes Josh Brolin and Jason Momoa as the brash Atreides soldiers Gurney Halleck and Duncan Idaho, Stellan Skarsgard as the grotesque Baron Vladimir Harkonnen, and Zendaya and Javier Bardem as the Fremen Chani and Stilgar.

Villeneuve’s vivid directorial style permeates “Dune,” whether that be stunning desert scenery or the immersive dream sequences. Much like Villeneuve’s previous films, such as “Blade Runner 2049” (2017) and “Sicario” (2015), the cinematography of “Dune” is astounding. Watching the film, especially in a theater, the viewer feels like they are there, standing in the seas of sand of Arrakis, inhaling the psychedelic spice alongside Paul Atreides. Villeneuve often places the silhouettes of characters against beautiful orange backdrops of the desert or against the rainy skies on the planet Caladan.

Hans Zimmer further cements his legacy as one of the great film composers with this production. He’s created a unique and mind-bending score. It is filled with fear-inducing cracks and screams and is one of the most unique Zimmer soundtracks to date. His music accurately reflects the huge scale and incredible visuals of the film. Zimmer should receive Oscar recognition.

While most critics have agreed on “Dune’s” technical and visual greatness, some have levied complaints that the film drags on for too long and has an unsatisfying ending. This could not be further from the truth. “Dune” constantly feeds the audience with worldbuilding and setup for the coming conflicts between the Atreides and Harkonnen forces before it culminates in action of climactic proportions. By the end of the film, Paul has undergone a complete character arc, the status-quo of Arrakis and the “Dune” universe have changed entirely, the action has spiked in the final minutes, many new characters and stories have been revealed, and the major consequences of the plot have impacted each key character. While it is true that “Dune” ends without a resolution to the Atreides-Harkonnen conflict, it perfectly sets up a second part while still telling a complete story on its own. Villeneuve chose to end “Dune: Part 1” with focused character conclusions and unresolved mysteries in the story instead of trying to cram everything into one epic—the right choice. “Dune’s” ending feels complete and satisfying for both the characters and the story, even if it teases a lot for the next part. “Dune: Part One” is an amazing watch for both sci-fi fans and general moviegoers. It is an inventive, gorgeous and hard-hitting masterpiece that will be remembered for years to come. As is said multiple times throughout the film, this is only the beginning.