‘The French Dispatch:’ a movie marvelously told through newspaper articles 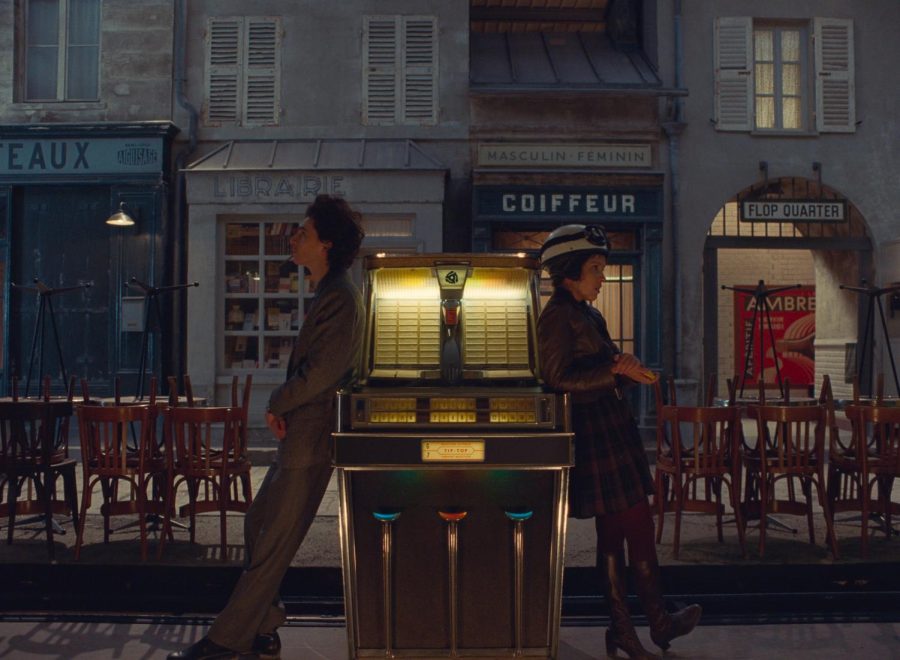 Like all good movies, ‘ The French Dispatch’ succeeds in captivating and invigorating the viewer, and in typical Wes Anderson style. This film is not pefect, but very close to being so. The way it’s told is original and unprecedented, so much so that a sense of disorder and confusion is felt during the beginning of the experience. As its anthological storyline begins, however, a feeling of bliss sets it.

Wes Anderson, a director known for his often quirky and symmetrical-looking movies, is a master at creating works that are only identifiable as his own. The movie begins with a thoughtfully placed and vibrantly colored teapot as well as a monotone voiceover by Angelica Houston which could only be found in a Wes Anderson film. From the script to the music to the visuals, this movie embodied all of Wes Anderson’s style to a tee.

Without a doubt, this film is certainly not the usual theatrical experience. Its story, unlike other Wes Anderson films, is conveyed as an anthology. These three widely different and intelligent stories are all told in the same French city of Ennui-sur-Blasé. Though this city is fictional, it is supposed to resemble Paris. Each story is written in the newspaper “The French Dispatch” and then acted out through the movie.

The story consists of a brief introduction to the city and its happenings, given by Owen Wilson riding a bike, then moves on to the three adventures that make up the bulk of the movie. The first is the story of an imprisoned artist, played exuberantly by Benicio Del Toro. The second is a story of a rebellious group of teen protesters led by Timothee Chalamet and accompanied by a journalist correspondent, who is played wonderfully by Frances McDormand. The third, and my favorite, is of a food critic working for the French Dispatch. The critic is portrayed by Jeffery Wright, who ends up trapped in a chase through the city of Ennui-sur-Blasé in order to retrieve the police chief’s kidnapped son.

this film will not garner every person’s attention. In some ways, its makeup is much too contrived to be palatable to modern audiences. Because of this, suspending your usual expectation of linear storytelling is necessary. Each miniature but incredibly fun anecdote must be taken as its own primary story. There isn’t an absolute factor that ties each story together besides all three of them being written for the same fictional magazine. This, coupled with the fact that at times some aspects of the story seem pointless because of their tedious recounting, raises some questions about the film. However, in the grand scale and gratification of the film, these are minor gripes. In the end, I was pleased that the story carries on through its few wearisome points and mostly succeeds in telling a coherent story. The musical score by Alexandre Desplat is also, as always, fascinating. The composition of the musical pieces matches the tone of the work beautifully.

Being adaptable and recognizing that this movie does not have typical storytelling elements is required for the best viewing experience of this film. Ultimately, it is definitely a film that ranks higher up in Wes Anderson’s filmography and is worthy of running out to the theatre to see. All the cast is superb and each member fully embodies the wonderful script that was written for them. This movie is Wes Anderson at his most “Anderson aesthetic.” Some of his previous works gave hints that they are in the same film space as bigger blockbuster movies, but this one doesn’t at all. It is completely a unique, standalone movie and feels greatly removed from anything in the Hollywood world. I loved every second of it, including the eccentric newspaper-themed credits.