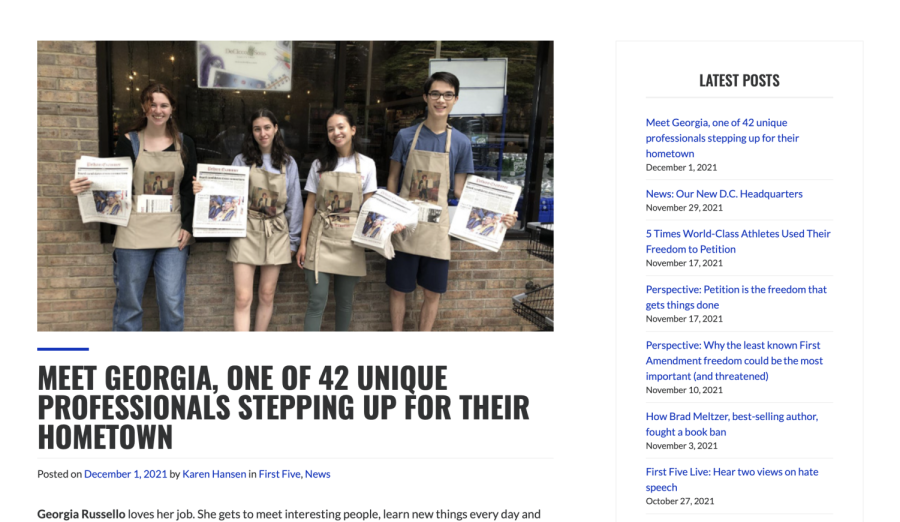 The story about the Pelham Examiner on the Freedom Forum website.

The Freedom Forum, a national foundation whose mission is to foster First Amendment freedoms, published a story Wednesday on the accomplishments and operations of the Pelham Examiner after interviewing Managing Editor Georgia Russello. Here’s how the story begins with a link to read the full text:
Georgia Russello loves her job. She gets to meet interesting people, learn new things every day and serve her neighbors in the small New York town she calls home. In many ways, she could be like any other editor at a community newspaper. In one way, she’s unlike most managing editors: Russello is a senior at Pelham Memorial High School.

The staff of the Pelham Examiner, where Russello started as a reporter her sophomore year, consists of 42 students aged 10 to 18 — all of whom take the job seriously. “The independent newspaper for Pelham” isn’t just a fun extracurricular to put on college applications. It’s essentially the town’s only paper, putting out information Russello says people otherwise just wouldn’t know.

A glance at the paper’s website one late November evening shows stories on the holiday trash pickup schedule, the kickoff of the firefighters’ annual toy drive, criticism of school administrators’ response to a student’s Snapchat post causing false rumors of a threat and a state panel’s report that the local board of education consistently violates state open meetings law… Read the full story here.
The Washington-based Freedom Forum is a major force in journalism. Among its programs are NewseumED and the Al Neuharth Free Spirit and Journalism Conference, which invites one student per state to attend each year. In the prior three years, New York State was represented by Pelham Examiner Executive Editor Oliver Tam in 2021 and former Executive Editor Charlotte Howard in 2019.