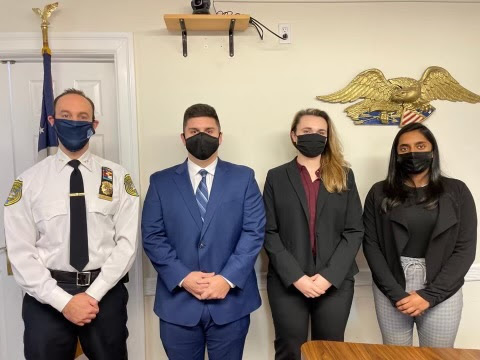 Provided by the Village of Pelham

Calling them the most diverse group of police officers the Village of Pelham has hired, Mayor Chance Mullen swore in three new recruits to fill vacancies in the department caused by retirement. Anjolie Alexander, Kylie Hearle and Victor Torres began their 20 weeks of training Monday at the Westchester County Police Academy.

The three trainees are “the most diverse class we’ve ever sent to the academy and two of our recruits are women,” said Mullen. “Ensuring racial and gender diversity within our department was a priority when we adopted Pelham’s Police Reform and Reinvention Plan last April. I’m so excited to see progress on this front, and I hope these recruits serve our community for many years to come.”

Ensuring more diverse hiring, along with adopting body cameras, were among the key recommendations made last spring by the Village of Pelham Steering Committee on Police Inclusion in its 44-page report.

New steps in the recruiting process sought to correct the lack of diversity in the department. Before the hiring of the three new recruits, there were no female police officers and the department was approximately 85% white. The population of the village is 59% white, the report said.

Last year, the Pelham Police Department encouraged members of underrepresented groups to take the civil service exam—which is given once every four years—specifically publicizing it to and attracting BIPOC and female residents to take the test.

“We also offered scholarships for free study guides and a 5-hour zoom course with Police Tutorial Service Inc.,” said Mullen. “Chief Pallett championed this effort, and we ended up with one of the largest, most diverse lists of local candidates we’ve seen in years.”