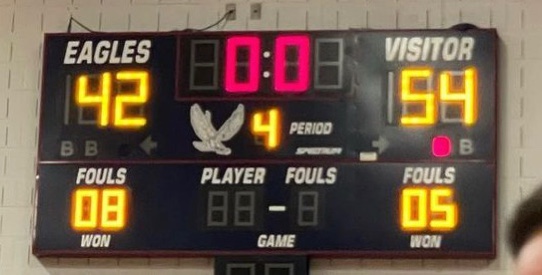 The PMHS boys basketball team defeated Eastchester on the road Friday night with a score of 54-42. With both teams coming in having only two losses, the intensity was in the air and the Pelicans came out on top.

Pelham started the game very slow, and it looked like Eastchester was headed towards a route. The Eagles went up 22-5 midway through the second quarter, before Pelham was able to manage the deficit, going into the half down 26-14.

Coming out of the break, the boys rallied and took a 27-26 lead after a 13-0 run. This brought Pelham, and the fans, right back into the game and they never looked back. Charlie Schellhammer’s buzzer-beater at the end of the the third quarter gave Pelham a 37-32 lead and the Pelicans were able to finish the game from there.

Senior captains Garrett Jenkins and Matteo Johnson were the stars of the night. Jenkins had 21 points, including a huge three-pointer late, and 15 rebounds. Johnson got going in the second half and finished the game with 15 points.

Pelham moves to 11-2 now, inching up to top spot in the league. With a Nanuet loss to Tappan Zee on Friday, the Pelicans move up to second in the Section 1 Class A standing, trailing behind undefeated Tappan Zee.

The boys will looked to extend their five game win streak Tuesday at home against the 6-5 Rye Garnets.