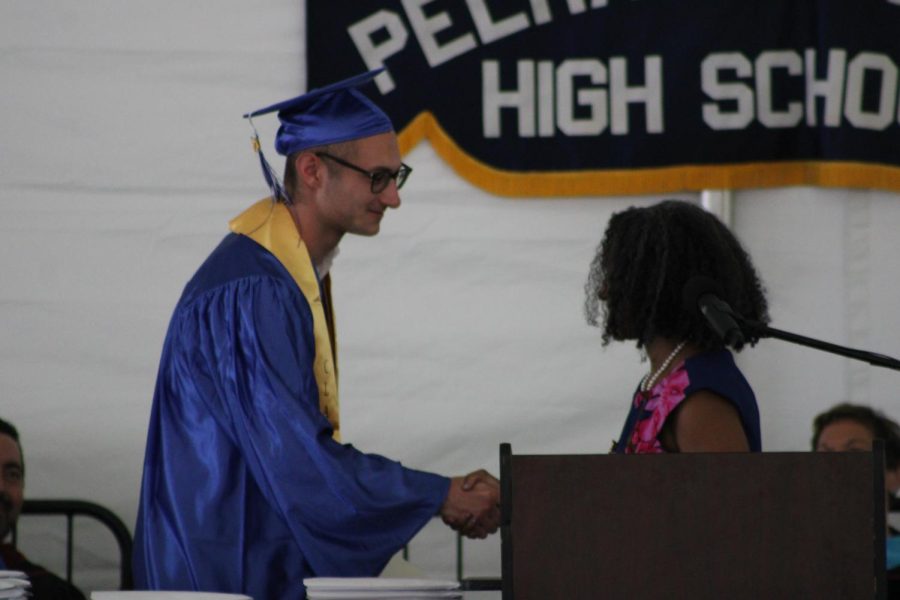 Andrew Kelly was named the first place recipient of the W.W. Fairclough Prize, which is awarded to the top three academic students in the graduating class, making him the valedictorian.

The winners of Pelham Memorial High School’s most prestigious awards, the W.W. Fairclough Prize and the Memorial Tablet, were announced at Saturday’s Centennial Commencement Ceremony.

The W.W. Fairclough Prize is conferred on the top three academic students in the graduating class by the Pelham Council of PTAs. The award was established in memory of W.W. Fairclough, who was PMHS principal from 1923 to 1945 and superintendent of schools from 1945 to 1955. William “Jack” Anderson was named the third-place recipient, Ann Liu in second place and Andrew Kelly received the first place honor. The winners of the Fairclough Prize are determined by grade point average, which makes Kelly and Liu the class valedictorian and salutatorian, respectively.

The Memorial Tablet is presented to one male and one female student selected by the PMHS faculty for “having attained the highest mental, moral, physical and academic achievements during their high school years,” said Superintendent Dr. Cheryl Champ during the ceremony. Malia McLellan and Thomas Shelton were chosen as this year’s recipients of the tablet, deemed “the most prestigious honor” and established in 1925. They will have their names inscribed on the “Roll of Honor” tablet that hangs outside of the PMHS Auditorium doors.

Three students were picked in a competition to give speeches at the ceremony. Around 30 seniors submitted their speeches to a panel of teachers. Winners of the first round then filmed a video of themselves giving their speech, which was watched and voted on by select teachers who chose the final three winners. McLellan, Oliver Tam and LJ Casenas were selected to give speeches alongside Anderson, who is the president of the graduating class.