Review: Café Latino serves up a new style in Pelham 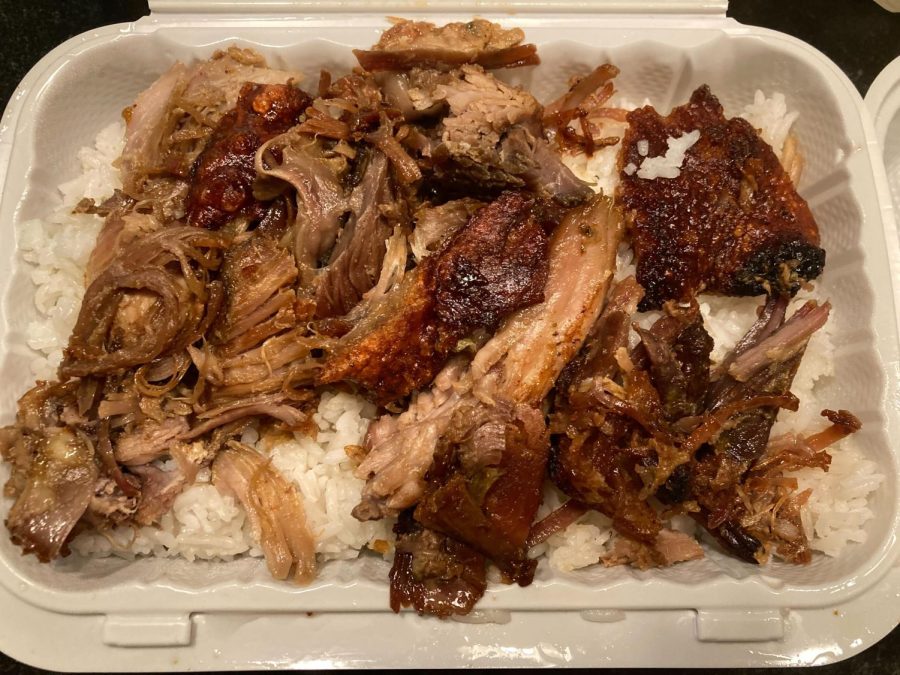 Spanish-Mexican-Dominican restaurant Café Latino opened in place of GoGreek in April. With there being few restaurants that serve the same cuisine as Café Latino does in Pelham, I was excited to try some of their options.

I ordered three tacos—carnitas, shrimp and al pastor—guacamole and chips, and one of their most popular dishes, the pernil plate: a plate of roasted pork over rice. The food also came with a side of beans and plantains.

They were extremely generous with the amount of guacamole, coming in a portion comparable to a pint of ice cream you’d find at the grocery store. Same with the chips, which were still warm from the fryer. The guacamole had good amounts of tomato, onion and cilantro. I enjoyed the heavy onion flavor the guacamole had, as well as the chunky texture, with a few pieces of avocado still left unsmashed. Though I did enjoy the guacamole, I wished there was a little more acidity in it. However, this could be easily fixed by adding some lime from the tacos.

The pernil plate was the star of the show. Pernil, a slow-roasted marinated pork shoulder, was very juicy and had crispy bits of the skin blanketing the white rice. Looking at the meat, you can tell it’s fresh and cooked in the restaurant from the assorted sizes of pork and the crispy skin pieces. The pork was delicious, but also really salty. I found that I had to eat a lot of the rice and beans with the pork to make up for the heavy salty taste in every bite. But, with the rice and beans, the pernil was very tasty.

Though I expected the white rice to be cilantro lime rice, it was just regular white rice. Still, the absence of cilantro and lime in the rice did not take away from any parts of the dish, and it was delicious. The portion size for this plate was very generous, after only eating half of it I was full and I could take home the other half for another meal.

The tacos came with the meat ordered as well as cilantro, onions and a green sauce. While I did not have the three tacos, I was told by my companion they were decent overall, with the shrimp tacos being bland and lacking flavor. Nonetheless, the al pastor tacos had a good flavor coming from the pineapple. Due to the tortillas being made of corn, they were too weak to hold all the meat, cilantro and onions together.

As for the black beans and plantain sides, both tasted as expected.

Overall, Café Latino is definitely a spot you should add to try in Pelham. The staff was really kind and helpful when ordering, and I definitely enjoyed my meal from there.