PMHS football advanced to 2-0 on the season Friday night with a 41-14 blowout of Clarkstown North.

Luke Green led the line on defense with 10 tackles, 3 of which were sacks.

Clarkstown put up more of a fight in the latter half of the game, scoring two touchdowns, but that wasn’t enough. The Pelicans halted their push and brought home the decisive victory.

The blowout was a change from Pelham’s overtime showdown with Clarkstown last season, in which the Pelicans narrowly escaped with the win in a real thriller. Making the victory more impressive: Pelham lost many of their best players from last season, while Clarkstown was able to keep most of the same team together.

“We dominated them by working as a unit, both on offense and defense,” said Johnson after the game. “We all did our parts well in the last two games, and the scoreboards have proven it. We’re looking forward to keeping this momentum going next week.” 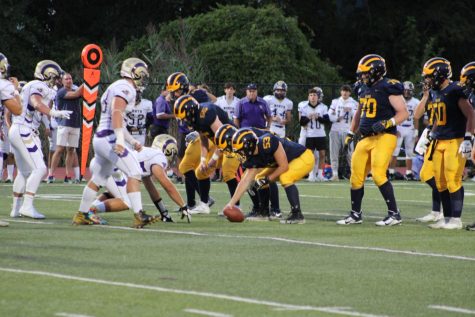 Pelham will host Sleepy Hollow Friday at Glover Field. The Pelicans will look to keep up their winning attitude and their roaring offense going.