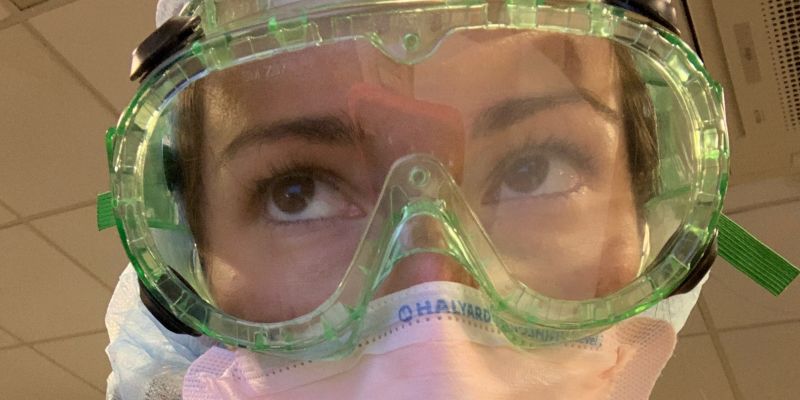 By Sophia Leung and Delia Lavallee

Jennifer Lapponese stood daily in the Montefiore Medical Center emergency room in the Bronx screening patients entering the hospital during Covid-19’s peak. Stationed by the elevators, she witnessed firsthand the toll that the virus took on patients, doctors, nurses, everyone at the hospital. It wasn’t her regular job. She’s a director of transplant at the hospital, but was called on to use her 22 years of ER experience to deal with the flood of those infected by coronavirus.

“We had this one (doctor), and she saw most of the Covid patients,” said Lapponese, a Pelham resident. “She would come off the elevators every day and just make eye contact with me, and she would just break down and cry. And you just sit there, and you feel so helpless.”

With over 5,000 Covid patients on the hospital’s Moses campus alone, she said, “We were the most hit hospital in the United States.”

“Honestly, it was really scary,” said Kimberly Garvey, a physician assistant at New York-Presbyterian Lawrence Hospital in Bronxville and a Pelham Memorial High School graduate. “I’m hoping I never see what I saw again in my life.”

Lawrence Hospital treated the first Covid case in the northeast.

Originally, the hospital’s policy required that any employee who had been exposed to a patient that tested positive for Covid stay home from work. “We quickly realized,” Garvey said, “that if we were going to keep doing that, then there would be no more staff to work in the hospital.” Current policy states that any workers displaying symptoms even remotely related to Covid are not permitted to come to work; but, as Garvey pointed out, “every single day the rules change.”

Before the virus hit, Garvey received various daily assignments that typically landed her in the operating room. But Garvey and many of her colleagues were redeployed to help ease the load elsewhere in the hospital as cases mounted.

Infection rates and deaths are continuing to decline in Westchester County and New York State. But from the beginning of the pandemic to its harrowing peak weeks, residents of Pelham worked in area hospitals on the very frontlines to save lives. These are their stories from the beginning through the peak to the current downward slope of the infection curve.

The initial outbreak held a lot of uncertainty for Nikolina Markovic, a physical therapist at Montefiore’s Jack D. Weiler Hospital in the Bronx. “At the beginning, we didn’t know much about the disease,” she said. “We didn’t know how it spread or what treatments worked.”

Working during the peak was an unprecedented experience for all the Pelham health professionals.

“It was the busiest I’ve ever been,” said Nandini Anandu, doctor of internal medicine at Northern Westchester Hospital in Mount Kisco.

Anandu typically works per diem, so Covid meant a dramatic shift in her schedule. As part of Northwell Health, the hospital received transfers from institutions that were “hardest hit,” turning what used to be a couple nights a week into 12- to 13-hour shifts, Monday through Thursday, for Anandu.

“I don’t think I even had time to think about it,” she said. Even when she was home, Anandu was busy keeping up with updates from the Centers for Disease Control and Prevention and local hospitals.

It was heartbreaking to witness the loneliness that accompanied the virus, Anandu said. She described one patient in particular, an elderly man who had been sheltered in place in his nursing home. “Sadly,” she said, “it made him start remembering things in his life that were bad.” The man is a survivor of a World War II concentration camp. “It just really broke my heart to see someone like this having to suffer all over again.”

“As a physician, I have encountered the reality of human suffering many times in my career, but I was not prepared for Covid -19,” said Dr. Michael Owen-Michaane, attending physician at New York-Presbyterian/Columbia Medical Center.

“The peak of Covid was around April 9,” he said. “At that time, every patient I saw had severe Covid. I worked 12-plus hour shifts in the hospital every day for two weeks before taking a day off…  The phone in the nurses station rang constantly with patients’ family members trying to find out what was happening to them. During that time period, I had to sign more death certificates than I had done over all the prior years of my career combined. Almost every day we were trying new medications and treatment strategies, but it seemed like nothing worked.”

Anandu attempted to be present in the Northern Westchester ER as often as she could to ease the worries of families who had to leave their loved ones at the hospital; many times, though, families would decline to say their goodbyes in person. “You can’t blame people,” she said. Despite being offered protective gowns, the hospital didn’t have N95 masks to spare, and oftentimes people couldn’t risk entering a Covid ward. “It was heartbreaking to see people who couldn’t be with a dying parent because they were afraid of getting sick or bringing the sickness back to their own family,” Anandu said.

This fear was shared by healthcare workers. Initially, Anandu said, there was a great deal of uncertainty as to whether PPE was effective. “I was doing this thing, as soon as I got home from work,” she said. “I’d leave my shoes outside. I’d go straight into my shower, with my glasses on, and just wash myself, even my glasses, from head to toe.”

Markovic was also concerned: Outside of work, she has become anxious about transmitting the virus through her daily actions. She said she is washing her hands much more frequently and is more acutely aware of the spread of germs.

Lapponese marveled that in one of Montefiore’s ICUs, which entirely contained Covid patients, none of the nurses contracted the virus. “So what does that mean to me? To me, it means personal protective equipment works, when you wear it the right way.” For non-healthcare workers, she sees this as evidence that in the long run, masks are helping to slow the transmission of Covid.

Pelham healthcare workers interviewed did encounter some shortages of protective gear during the pandemic, but not as serious as was reported in New York City and elsewhere.

When Montefiore was running out, Lapponese looked to the Moms of Pelham Facebook page for help, and was blown away by the response. “Within two hours,” she said, “MOPs had a package on my front doorstep of N95 masks and surgical masks,” and they continued to check in with her to ensure that she and her colleagues were receiving enough protection.

The N95 shortage, Anandu said, was a nationwide phenomenon, not unique to any one hospital. “There was a time where we were given one N95 mask and you basically kept reusing it until it broke, or until it became visibly soiled,” she said. But the PPE still worked, she said, as evidenced by results of the antibody tests that she and her colleagues received.

I think this is here forever, for the rest of our lives. I think Covid is here.”

At Lawrence Hospital, Director of Pathology Dr. Peter Hoffmann worked behind the scenes, spending most of his day in the laboratory. The physical aspect of his job did not change, but his life was impacted by Covid.

“When the virus first hit New York State, specimens consisting of nasal and mouth swabs from all suspected patients were sent to the Wadsworth Center in Albany for testing, and nowhere else,” Hoffmann said. Strict criteria were put in place to limit who was being tested, but as cases started flooding in, “the FDA started changing the rules.” A one-month validation requirement for tests was essentially dropped when the testing could no longer keep up with the cases, and “all of a sudden,” he said, “all of these tests miraculously came out of nowhere, and we were starting to ramp up and test for the virus.”

With cases on the rise, Hoffmann said, “the virus was doing things we’d never seen before.” Some Covid patients were found to have such severe blood-clotting issues that they had to undergo amputation. As many employees were redeployed to ICUs, “the hospital became strangely silent,” he said.

Since medical centers have calmed, healthcare workers are examining what they went through and looking ahead to the coming months. Both Garvey and Lapponese agree that as horrible as their experiences were, it was incredible to see people come together and take on new roles.

“We can already see the toll that Covid-19 has taken on the community in terms of lost neighbors, friends and family members,” said Owen-Michaane. “Children and teens have lost months of education and important life experiences. Many adults are facing severe economic hardships. But I also see signs of hope in our community. I have been amazed at the way Pelhamites have pulled together.”

Garvey said there remains a risk of a “slight bump upward” in cases over the next few months. Hoffmann shares this concern, and observed that although new tests are being released quickly, validity does not necessarily follow. “There’s going to be a lot of false positives,” he said, “and the danger of a false positive is that you think you’re immune, and you’re not.”

Lapponese said Covid will likely become the new flu: a virus with an annual vaccine and multiple strains. Employees at Montefiore are required to get a flu vaccine every year, she said, and “I think Covid will be the same way.”

“I think this is here forever, for the rest of our lives. I think Covid is here.”