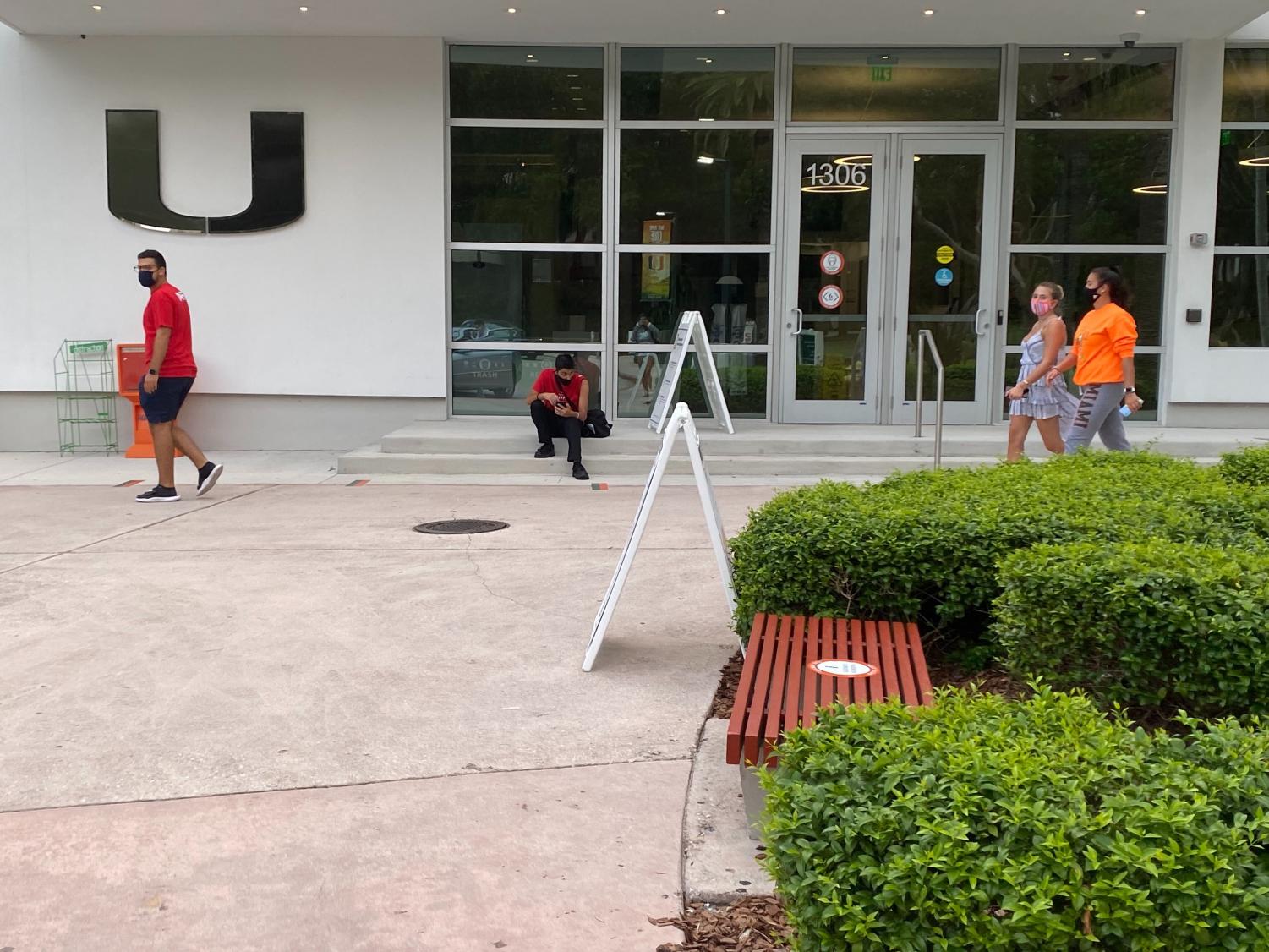 The quiet University of Miami campus.

College bound, or are plans turned around? Pelham undergrads on new year under Covid’s shadow

'College has been very different from what I expected'

Many college and university students from Pelham have already started school, but not in the way they anticipated. Others are beginning instruction in the coming days, and whether they are learning virtually, in person on campus or a mixture of both, the new school year shadowed by the Covid-19 pandemic is beginning as strangely and differently as last year ended.

Less than 10 percent of colleges and universities opted for fully virtual instruction for the start of the 2020-21 school year. California’s university system, the largest in the U.S., has cancelled in-person classes for the fall semester at all 23 of its campuses. Harvard University announced in early July that all undergraduate courses will be online for the entire academic year.

While some schools are closing their lecture halls, libraries and campuses to curb the spread of Covid-19, a majority are opting for either select in-person classes or a hybrid learning model, with a smaller number of schools opening for fully in-person education. Schools have put in place requirements to social distance and wear masks, but at some schools those rules are not being followed or enforced strictly. The University of Alabama resumed classes on Aug. 19, and the university has reported more 1,200 cases of Covid-19 since.

Isabelle Anderson is starting her freshman year 1,302 miles away from Pelham at the University of Miami in Florida, where a mix of virtual and online classes has already begun. “So far, college has been very different from what I expected,” she said. “The University of Miami is under a strict 10 p.m. curfew, so we can’t leave our dorm buildings after ten, which makes being social a little bit harder.”

Anderson said that all of her major freshman orientation events were held virtually. “Any in-person class we have is extremely distanced, which I appreciate because I want to stay safe. However, it is so much harder to connect with the students and faculty in the classroom. I enjoy learning, especially when I can form a bond with my classmates and professors, but social distancing practices make this very difficult.”

Farther north, sophomore Lindsay McNamara began hybrid classes at the College of Charleston in South Carolina. “I definitely feel like I am missing out on the college experience socially because I am not able to see all of my friends like I usually would,” she said. “Also, because our classes are online right now, I find it incredibly difficult to focus and learn from home instead of in a classroom.”

McNamara is currently living off campus in an apartment with roommates. “When all of my roommates and I were trying to attend Zoom classes at the same time, it caused our Wi-Fi to be very slow and glitchy,” she said. She believes the rest of the school year will be “very difficult and frustrating.”

Freshman S.J. O’Connor is going to start her academic year at Middlebury College in the coming days. Middlebury, located in Vermont, opted for full in-person instruction, one of about 40 schools in the country that has made that choice. The school has put in rules for students to follow when they arrive on campus to start the school year.

“Food is take-out for the first two weeks, and if you want to sit, you can go outside, six feet apart,” O’Connor said. “Everyone must wear masks everywhere on campus. I think these rules will be followed by students, and it is much easier as Middlebury is a smaller school.”

Sophomore Joseph Silva will be starting hybrid classes at Providence College in Rhode Island. “We have to wear masks everywhere besides our room,” he said. “I expect it to be pretty similar to last year besides the seating arrangements.”

Some college students who have already returned to school have proven out the speculation that they would not follow social distancing and mask wearing rules when going out.

“Some students still gather in large groups when they’re not supposed to,” said Alexandra Marriott, a freshman at SUNY Cortland, which has opted for the hybrid model.

“Honestly, many people haven’t been following these guidelines, but the punishments have been harsh for those caught,” said Anderson.

“The gathering rule is not being followed by most people at my school,” McNamara said. That rule limits the number of people at gatherings to 10.

Freshman Jillian Pintauro at High Point University in North Carolina said, “When a student tests positive for Covid-19, they are placed in one of the couple hotel rooms HPU has rented out to recover and distance from other students.”

While many Pelham students have returned or are returning to their campuses, some are staying home or in apartments because their schools have opted for full virtual instruction.

Freshman Bernadette Russo is one of those at home. Her school, Lafayette College in Pennsylvania, “is fully remote, so everything is online,” Russo said. “It’s surely different from a typical college experience, and it’s going to take some adjusting, especially with feeling comfortable working on Zoom. It’s more difficult to meet people, but everyone is going through the same thing so there is a sense of camaraderie.”

Anne Healy, a senior at George Washington University in Washington, D.C., is doing all virtual classes from her off-campus apartment.

“The year will be much more individually-driven,” Healy said. “Considering I am a senior, I won’t miss out on making personal friendships and the like, as I have also been living in an apartment near campus for over a year already. Considering campus is fully closed, though, many of the resources that allow students to be successful—like the library, academic centers, etc.—will be inaccessible. This will likely cause students’ learning ability to suffer.”

About a five minute drive away from GWU, Georgetown University has also opted for fully remote classes. Freshman Grace Liberatore is going to start classes soon from her home in Pelham.

“I’m expecting this upcoming semester to be a little more challenging than usual because I will be looking at a screen a lot more than usual, which can make my head hurt after a while,” Liberatore said. “However, I’m optimistic that I will still be able to interact with my classmates and meet a lot of new friends because my school has made an extra effort to connect us with others.”

Regardless of how their schools are handling classes, many students—especially freshmen—share the same worries about the state of their social lives during a pandemic.

“I think it will definitely be less exciting than an in-person experience would be,” said Anna Shampanier-Bowen, a freshman at Columbia University, which has opted for fully virtual learning. “It will be much harder to meet people. I also think it will be harder to focus in class and stay motivated to complete my work.”

“My college made it mandatory for students to download an app where we have to fill out a Covid assessment prior to stepping foot on campus for classes” each day, said Kimberly Perez, a freshman at Iona College. The assessment determines if students are cleared to come onto campus that day.

According to Perez, Iona College, as with other schools, has been fining students caught partying or congregating in large groups or having several guests in their dorms. Iona, which opted for a hybrid learning, is located in New Rochelle, the epicenter of the Westchester Covid outbreak in March.

Pelham parents have expressed concern over primary and secondary students wearing masks for long periods of time during the summer heat, and those concerns apply to college students as well. “Studying on campus hasn’t been bad, however walking around from class to class while wearing a mask in the hot weather has been difficult to manage,” Perez said. “Also, while you are in class, you are not allowed to remove your mask to drink water or eat a snack.”

With the number of Covid-19 cases rising at some colleges and universities around the country, the state of the school year remains uncertain. Plans and approaches will probably change at a moment’s notice. Information for almost 2,000 college and university reopening plans can be found here.

The Pelham Examiner intends for this area to be used to foster healthy, thought-provoking discussion. Comments are expected to adhere to our standards and to be respectful and constructive. As such, we do not permit the use of profanity, foul language, personal attacks or the use of language that might be interpreted as libelous. Comments are reviewed and must be approved by a moderator to ensure that they meet these standards. Commenters must provide a full name. The Pelham Examiner does not allow anonymous comments, and requires a valid email address. The email address will not be displayed but will be used to confirm your comments. We will check to see if it works and may also request a street address if an email looks to be spam.