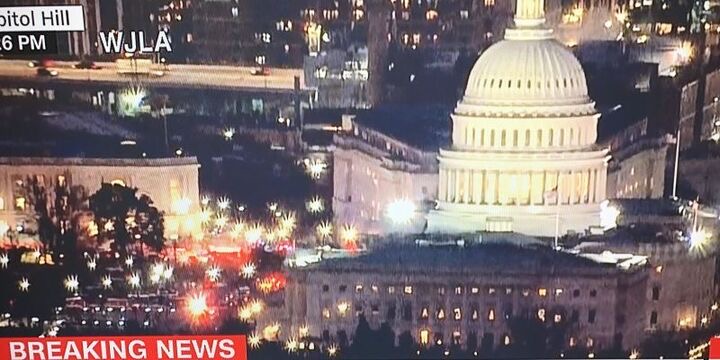 'The rioters who have stormed the Capitol are criminals who have no regard for democracy.'

Following the insurrection in Washington by a mob encouraged by President Donald Trump Wednesday—interrupting the tallying of votes from the Electoral College—the staff of the Pelham Examiner reached out to local officials and residents for their reactions to an historic assault on American democracy, which included the first attack on the U.S. Capitol building since 1814.

“I condemn this disturbing and lawless behavior and support the peaceful transition of power, which has defined our country,” said Pelham Manor Mayor Jennifer Monachino Lapey, a Republican.

“I’m sad and embarrassed for our country,” said Village of Pelham Mayor Chance Mullen, a Democrat. “This is what happens when politicians lie and stoke fear for political gain. I hope our elected leaders can continue to their work without fear for their safety.”

‘Act of sedition and treason’

“This violent attempted coup was an act of sedition and treason, and there needs to be consequences for all of those involved—including our president, who not only refused to demand that they stop but instigated this revolt,” said Town Councilwoman Kristen Burke, a Democrat. “While I always respect the many differences that our community members have, including political differences—on all sides of the political spectrum—this today was not politics. This was a violent criminal act.”

“I’m deeply appalled by these acts of sedition,” said Laura Baber, a Pelham resident. “The norms of our democracy have held against repeated assault, but I hope we’re all tired of just squeaking by.”

‘The village remains in good hands’

“As a trustee, when it comes to civil unrest, my thoughts are on the safety, health, comfort and general welfare of my neighbors, the protection of their property and the preservation of peace and good order,” said Democratic Village of Pelham Trustee Mike Carpenter. “The perpetrators of today’s senseless acts of violence are far away, and I know that the village remains in good hands tonight. As a citizen, my thoughts are with the electeds, their staff and those sworn to protect them as they carry out their constitutionally mandated duties. In the meantime, I eagerly await a peaceful transition to the Biden administration, and what I hope to be the end of this divisive period in our history.”

“I am deeply disturbed by the images coming out of our nation’s capital,” said Pelham Manor Trustee Angela DeLillo, a Republican. “I denounce this and all violence and believe in a peaceful and orderly transition of power. This is a profound and important part of the bedrock of our country and its tenants.”

“This is a terrifying and disgusting assault on democracy,” said Pelham resident Michelle Acosta.

‘An act of domestic terrorism’

“The attack on the Capitol was an act of domestic terrorism, and a direct assault on our democracy and the safety of the American people. What we witnessed was a violent attempt to violate the U.S. Constitution and a horrific display of white supremacy and privilege,” said New York State Senator Alessandra Biaggi, a Democrat who represents the Bronx and Westchester County. “Under no circumstances should a mob of rioters trying to undermine the results of a democratic election – armed with guns, Confederate flags, and symbols of fascism and anti-semitism – have been able to enter the Capitol building. I am absolutely appalled by the lack of leadership to prevent this from happening, and the hypocrisy displayed by law enforcement in their lenient response to a mob of white supremacists. The rioters who participated in this egregious attack on our nation, and those who enabled them, must be held accountable and justice must be served to the fullest extent of the law.”

“I have witnessed violence and an attack on the Capitol firsthand in my lifetime,” said Pelham Manor Trustee Maurice Owen-Michaane, a Republican. “I was a page in the summer of 1998. I believe it was two terrorists, they happened to be American… stormed the Capitol at the lower level and proceeded to shoot several people… I was there, I literally was making an errand and coming down the stairs and saw the gunmen and saw someone get shot in cold blood. And as soon as I saw on TV what was going on, this just brought a flood of emotions of just how frightening (Wednesday’s attack was), whether you’re an adult or child. And everyone’s watching, the world is watching us. This is beyond disgusting.”

‘No regard for democracy’

“What started out as a day of hope, confirming the vote count for our new, democratically elected president, has now descended into ugliness and sadness,” said Democratic Assemblywoman Amy Paulin. “The rioters who have stormed the Capitol are criminals who have no regard for democracy. They do not represent America as I know it. I have faith in this country. In two weeks, we will have a new president, and I have every hope that the new administration will heal this divide.”

“I condemn all violent protests and don’t condone any opposition to the rule of law for any reason whatsoever,” said Town of Pelham Supervisor Dan McLaughlin, a Republican.

“Today’s events in Washington, D.C., are frightening and run counter to the principles upon which this country was founded,” said Republican Pelham Manor Trustee Joseph Senerchia. “I repudiate violence, threats and intimidation in all forms.”

‘The world is watching’

“Locally, Republicans and Democrats on the town council have worked together with good will and respect because we all love this country and our community. The bedrock of democracy can be found right here in Pelham,” said Democratic Town Councilwoman Maura Curtin. “Words matter. Violence and the storming of the Capitol incited by a president who is more concerned with tearing us apart than bringing us together should be fiercely condemned by all Americans… The election was not rigged, there was no massive fraud, and the people who stormed the Capitol need to be punished by the fullest extent of the law. The world is watching and our children are watching.”

‘Against the founding principles’

“I condemn all violence,” said Pelham Manor Trustee Bridget Bennett, an Independent. “The actions of today go against the founding principles of our country. I pray for the safety of everyone in our nation and for a calming of and a resolution to the situation as soon as possible.”

“As a recent citizen to this country, I am embarrassed by the behavior of violent, terrorist Trump supporters. I am hoping that slowly with our new government that this country will slowly start to heal from the horror of the past four years of governance,” said Wendy Dougherty, a Pelham resident.

“They should’ve shot them,” said Pelham resident Joe Paterra. “The government wasn’t prepared for it and shows—that’s how they got in. They broke windows, they came through. That’s a violation. They could’ve been foreign terrorists. There was no checking for their weapons. There was nobody there. It was unacceptable… President Trump has incited these terrorists and is certainly an accessory to these terrorists.”

“I never thought I would see this in my lifetime,” said Dr. David D’Adamo, a Pelham Manor resident. “Not only is it un-American activity by the protestors but shameful dereliction of duty by our national leaders.”

“It’s just proof of how (Trump) is a threat to democracy,” said PMHS sophomore Quincy Stern. “Trump nurtured the creature that is the MAGA mob, I guess if that’s what you want to call it, and now they’re not holding back. The storming of the Capitol and Trump’s downplaying of it just shows… domestic terrorism hidden under ‘patriotism.'”

“This is the culmination of four years of corrupt ineptitude that has been further encouraged by power hungry enablers,” said Rebecca Ford, a Pelham resident.

‘Saddened by the disrespect’

“I am feeling shame for those senators and people in power who incited this violence and continue to stoke the fires of misinformation, bigority and lies,” said Pelham resident Karen Teller. “The election was free and fair, and the people spoke. I am extremely saddened by the disrespect that was displayed at one of our most sacred symbols of democracy, the U.S. Capitol.”

“I just assumed there were protocols for something like this,” said PMHS graduate and D.C. student Melissa Altschiller. “Instead, almost in the blink of an eye, anarchists were inside the Rotunda but still no rubber bullets, riot gear or tear gas. My friends had been shot at and gassed just a few months earlier.”

‘Part of me that wasn’t surprised’

“Those weren’t protestors. Those were people attempting to overthrow the government,” said Pelham resident Erin Ginsburg. “But as shocking as it was, there’s a part of me that wasn’t surprised. This was the logical endpoint of the way Donald Trump—and his many, many enablers—have attempted to use insightful language and outright lies to subvert the results of the election.”

“I think there’s a lot everyone wants to say, but for the sake of peace, I’d say that what we are witnessing is the end of an era and the forging of a new one,” said Kae Purcea, a PMHS senior. “I say forging because everyone knows neither side will go quietly into the good night.”