General fund reserves have climbed by about $5.6 million since 2018-19

As part of the board of education election and budget vote on May 17, the community is also being asked to vote on the creation of a capital reserve by the school district to fund future capital-expenditure needs. The school district currently holds approximately $21 million in general fund reserves, an amount that has grown substantially over the past two years, and the district has seemingly run out of places to park its excess cash and any future surpluses. Simply put, at a time when inflation is spiking, the funds in the district’s savings accounts are at their highest level in more than a decade. From a basic economic perspective, this makes no sense. Creating yet another savings account in the form of a new capital reserve seems to make even less sense. The acquisition of long-lived assets should be funded through a program of serial-bond issuance rather than a capital reserve while existing excess reserves and future surpluses should be applied toward educational programming, tax relief and debt service.

The district has proposed a tax-levy increase of 1.95% for the 2022-23 fiscal year. This will be the first year since 2017-18 the district has not levied the maximum amount (excluding the use of debt-service reserves) allowable under the state tax cap. Prior to 2018-19, the district had only taken the maximum levy once during the tax-cap era, and that was in 2014-15.

The onset of the Covid-19 pandemic in early 2020 resulted in significant cost savings for the district as a result of lower spending on items such as utilities, maintenance, field trips and substitute teachers. The district also benefited from additional federal and state aid and higher than expected sales tax receipts. As a result, the district generated a total surplus exceeding $5.5 million in the 2019-20 and 2020-21 fiscal years and is expected to generate another surplus in the 2021-22 fiscal year.

This unexpected benefit of the district’s cash balances has largely gone into various reserve accounts. The district’s general fund reserves have increased by approximately $5.6 million since 2018-19, from approximately $15.2 million to approximately $20.7 million as of June 30, 2021. Reserves are expected to increase again this fiscal year to $21.1 million, according to the Property Tax Report Card. Reserves would have been even higher if not for the $1.1 million purchase in 2019 of 314 Pelhamdale Ave., which is currently being used as office space by the district. The general fund reserves do not include an additional $2.1 million in the debt service reserve.

The largest component of the district’s general fund reserves is the tax certiorari reserve, which stood at $6.1 million as of June 30, 2021, up from $3.7 million in 2019, and is at the highest level it has been in many years. The tax certiorari reserve is used to pay property-tax settlements to commercial landlords who successfully challenge their assessments. (Homeowners who successfully challenge their assessments do not receive settlements, but rather see a decrease in future property taxes owed). Since 2014, only $800,000 total has been paid out by the district for tax settlements. As seen below, there has been an average of $100,000 in annual tax settlements since 2014, with a range of $3,518 to $77,581 between 2015-21. 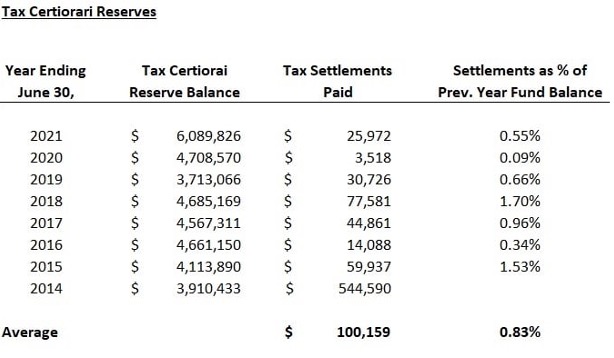 The tax certiorari reserve is one of the key reserves where money can be freely moved in and out during the year, which essentially circumvents the limitation on unassigned reserves, as evidenced by its effective use to purchase 314 Pelhamdale Ave. (further described below). This reserve is significantly overfunded given historical payout data and the lack of correlation to actual risk. Pelham’s tax certiorari reserve is one of the highest in Westchester (seen in the table below), which is notable given our relatively small commercial-tax base and the approximately $12 million of property tax revenues the district generates from commercial landlords. The Bronxville school district recently proposed reducing its tax certiorari reserve to $200,000 based on its historical tax-settlement data, with average settlements over the past five years of $14,000 and a high of $53,000. If Pelham sized its tax certiorari reserve similarly to Bronxville’s proposal (14.3 times the five-year average of $36,532 or 3.8 times the five-year high of $77,581), it would hold a reserve of between $292,759 and $521,880, freeing up more than $5.5 million in cash just from this one reserve that could be spent elsewhere.

The reserve for repairs and future capital projects has remained flat since 2016 at approximately $600,ooo, while a $1.3 million reserve to repair and replace the turf at Glover Field was funded in 2016 and is not expected to be spent for another three to five years from now, meaning it will have sat idle for a total of nine to twelve years instead of being applied to educational programming or tax relief.

Pelham’s reserve balances were 25.8% of its total budget in 2020-21 and are high on both an absolute and relative basis when compared to other school districts in Westchester. 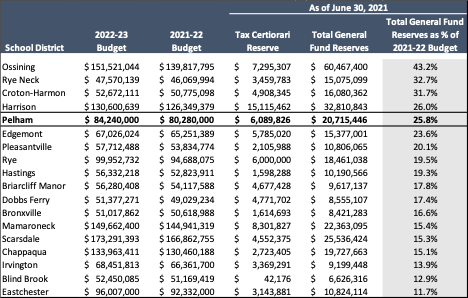 The school district, on its 2022 capital reserve information page, states it “maintains a number of reserves, most of which can only be used for certain purposes.” While this statement is technically correct, in reality, funds from each reserve can easily be moved by the board of education to fund various needs. According to a summary of school board reserves by the New York State School Boards Association, reserves in many funds can be moved by a simple majority vote of the board of education or after a short period of time following a public hearing.

The district does in fact have a high level of flexibility in using its existing reserves for a wide variety of purposes through the use of transfers:

The acquisition of 314 Pelhamdale Ave. also demonstrates the level of flexibility the district has in its operating budget. The home required significant renovations in order to convert it into office space, and that expense was paid for out of the district’s operating budget. In addition, the district was unable to move all of its administrative staff to 314 Pelhamdale Ave. and subsequently entered into a lease agreement at the Sanborn Map Building, which was approved by the board of education on June 16, 2021, for a total of 5,598 square feet of additional office space with a full-year lease expense—also coming out of the operating budget—of approximately $163,500.

The acquisition of 314 Pelhamdale Ave. also demonstrates the level of flexibility the district has in its operating budget.”

The district is now proposing to create a capital reserve on top of its $21 million in existing reserves. The district is seemingly running out of places to park taxpayer funds. The unassigned reserve, which can be spent on anything the district chooses, is limited to 4% of the budget and is currently at its maximum level. Annual contributions to the TRS retirement reserve are limited to 2% of total teacher compensation and the total TRS reserve size is limited to 10% of total teacher compensation, a level the district’s reserve is quickly approaching.

The proposal to create a capital reserve, whether intentional or not, is a signal to the community that the district will continue to generate surpluses over the next decade. If surpluses are indeed generated over the next few years, that money should be spent on education, taxpayer relief and toward our existing debt service, rather than going into a capital reserve.

The school district has argued that a capital reserve would allow it to fund its capital needs without the need for borrowing. In reality, the district would essentially be borrowing from taxpayers on an interest-free basis to pre-fund future capital-expenditure needs, which may not happen for years, rather than borrow funds for long-lived assets at the appropriate time.

In 2018, during the Hutchinson Elementary School bond process, the district detailed a large number of capital projects required to maintain and improve its existing infrastructure, including replacing boilers, upgrading electrical equipment and installing new HVAC systems. The district estimates the current cost of these projects to be approximately $15 million, which would be offset by some aid from New York State.

The district should immediately begin a program of borrowing every five to ten years to ensure its infrastructure is consistently up to date.”

The district should immediately begin a program of borrowing every five to ten years to ensure its infrastructure is consistently up to date. Serial-bond issuance would be tax-neutral to the community as new bonds would be issued when old bonds mature. Borrowing sporadically and only in times of emergency, as experienced in 2018 when a new Hutchinson School was needed, results in ebbs and flows in property taxes.

The old saying goes that a dollar today is worth more than a dollar tomorrow. Paying for our capital needs over time, rather than paying upfront, is more cost effective for the community given the district’s low cost of capital and the current inflationary environment. The district has the ability to pay back its debt with “cheap dollars” over a ten-year timeframe or longer while providing a great deal of flexibility to taxpayers.

The school district has stated that borrowing for capital projects would result in an increase in taxes for the community. However, the district can apply its existing excess reserves and surpluses toward immediate tax relief by appropriating funds toward upcoming budgets and lowering the tax levy. This immediate savings for taxpayers would then be offset by a slight increase in taxes spread out over time associated with debt service. Taxpayers who may move out of Pelham would never see a benefit from dollars that were put aside in a reserve.

In addition, the school district is expected to receive PILOT (payment in lieu of taxes) payments from the proposed Pelham House apartment project in the Village of Pelham, in addition to taxes from the proposed development at 139 Fifth Ave. These payments, which are applied to the district’s total allowable tax levy, will result in savings for individual taxpayers in Pelham, making any slight increase in school taxes to service debt more palatable.

Taxpayers who may move out of Pelham would never see a benefit from dollars that were put aside in a reserve.”

Also, ask yourself, what happens if the district is unable to generate the surpluses necessary to fund the capital reserve and pay for projects? It would either need to delay these projects or borrow before costs continue to rise and existing equipment fails. Beginning a borrowing program sooner rather than later eliminates this risk.

It is important to note that the community is being asked to vote on the creation of a capital reserve as a separate proposition from the budget. Voters have the ability to approve the budget while voting against the capital reserve. It makes more financial and practical sense to fund our capital needs through a borrowing program and to apply the district’s excess funds toward educational programming, tax relief and debt service rather than adding to already-inflated reserves.