'I am someone who has had a safe abortion' 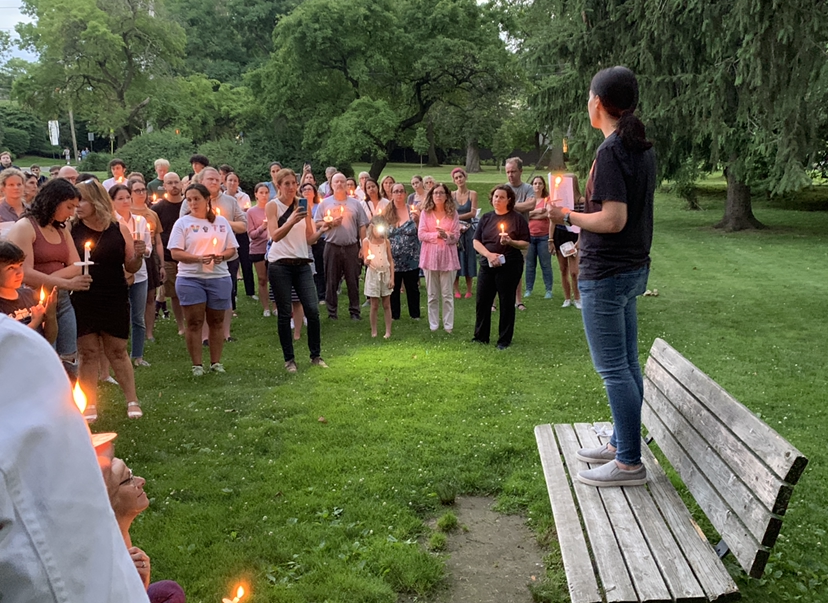 Progressive Women of Pelham led a walk and candlelight vigil on Friday after the U.S. Supreme Court voted 6-3 to overturn Roe v. Wade, eliminating the 50-year-old federal right to an abortion.

More than 40 Pelham residents began the walk at 659 Ely Ave. in Pelham Manor and ended at Weihman Park at the Four Corners intersection. All who gathered to march carried candles as they walked. The group stopped and heard organizers and community members speak about decision.

Roe v. Wade protected a woman’s right to an abortion after the Supreme Court ruled in 1973 that the U.S. Constitution gave a pregnant woman the right to choose. That decision sparked a long-running debate in America between those in favor and those opposed abortion, who often argued on religious or moral grounds. With the decision, some states immediately implemented laws banning abortions, with others planning on outlawing the procedure in the coming weeks and months.  Liberal-leaning states are working to prevent abortions from being outlawed at all and to welcome women from other states seeking the procedure.

“This is a fundamental human right, and I can’t imagine the government telling me whether or not to bear a child because it is such a huge undertaking to be a parent,” said Liz Alderman, organizer of the rally. “It is important for every woman to be able to be a parent when she is ready. For medical and personal reasons, one in four women will have an abortion in their lifetime, and if they do, it is not anybody’s business.”

“Here in New York, we are very fortunate that we are not in a trigger state, but I feel like I can understand what it would be like to be in a desperate situation,” she said. “The implications of what happened today are terrifying.”

In May, a draft of the decision was leaked—an unprecedented move in the history of the high court—and it indicated the majority planned to overturn Roe. The leak did not stop the conservative majority from acting to remove a right the previous court had granted.

“As much as I anticipated this moment, it flattened me this morning,” said Liz Massie, a member of the executive board of Progressive Women of Pelham. “This represents the first time in American history that there is a loss of a law granted by the federal government, and my fear is that there is a loss of many more rights to come.”

“I am someone who has had a safe abortion, so I thank the people who had helped me do that every day,” Massie said. “I truly believe that everyone should have access to the legal abortion I had, so I will dedicate myself to ensuring that for the future of young women in this country. This is the first attack of a long line of attacks that are coming our way, so we need to be prepared and work together to fight back.”

Karen Gardner, another member of Progressive Women of Pelham, said, “I grew up in an age when this became law, and when this law started to become threatened, I learned from my mother that she had an abortion. It was a family decision that she and my father made when she was going to have another child after me. But early in the pregnancy she got taken care of because they felt their family was set at size four. I was beyond shocked to hear this especially because it was still illegal when she had it done. Luckily, she had a good doctor who put her in touch with the right people, and many others in her community made a similar decision. When Roe v. Wade passed, it was a relief to so many because they could do it legally.”

One attendee at the vigil, Van Tran, said, “This decision really impacts the most vulnerable in our communities, which are those living in poverty or people of color. I have people testifying saying that they are in Texas and can not get access to abortion and have no way to go do this or get help. What are we doing for these people? All these women are suffering because they do not have a right over their own bodies which impacts everyone.”

“Regardless of the decision,” Tran said, “the people who benefit the most from this are the ones who are impacted the most, which are the members of the government who are trying to control black and brown bodies and women of color.”